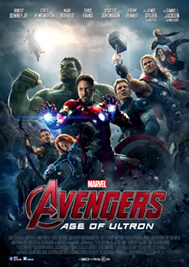 Following the events of the first Avengers film and concluding Marvel’s phase 2 (Iron man 3, Thor: The Dark World, Captain America: The Winter Soldier and Guardians of the Galaxy), this new avengers movie takes us once more into our favorite superheroes’ world. This time, the stakes are much higher as our heroes have to push themselves beyond their limits to take on Ultron, an artificially intelligent being in pursuit of worldwide peace. From his point of view, there’s only one way to achieve it: Our extinction. Fortunately for the Avengers, they will not face this challenge alone as they also find some unexpected allies along the ways. …

There’s a reason why Avengers: Age of Ultron has been one of the most anticipated films of 2015: It’s spectacular. Joss Whedon is back in the director’s chair, providing us some of his best work so far.  Robert Downey Jr (Iron Man) and Chris Evans (Captain America) are back for the sequel alongside many other familiar faces. We also get to see new additions to the team such as Aaron Taylor-Johnson (Quicksilver), Elizabeth Olsen (Scarlet Witch) of course James Spader as the menacing villain Ultron. The movie kicks off with some of the most incredible action sequences ever seen. Comic book fans will rejoice over the Easter Eggs hidden in this film. The portrayal of iconic superheroes such as Thor, The Hulk and Vision is also very respectful to what we’ve seen in the comics. Marvel manages to adapt a very complicated storyline so that non comic book fans can have a fun experience as well. Marvel Studios almost have a flawless track record, therefore you won’t be surprised if we tell you that we totally “geeked out” over it.

But is Avengers: Age of Ultron better or at least, as good as its predecessor? The answer is no and quite frankly, we do not suggest you to walk into the theater which such high expectations. The plot gets a bit lazy sometimes and certain sequences drag on longer than they should. On its own, Avengers: Age of Ultron stands among the greatest film of its genre but it will most likely be compared to the multitude of superhero movies that Marvel has been releasing in the past decade . This will probably affect its critic rating given the fact that Marvel has constantly knocked it out of the park with their previous films. Unfortunately, this movie will also suffer from an overload of “fanboyism” as well. A lot of people will choose to ignore its flaws out of respect for the Marvel entity, which is also understandable. Regardless, no one walks into a movie like Avengers: Age of Ultron looking for dramatic and meaningful adaptation. We want Avengers: Age of Ultron to be fun, action packed, crazy and entertaining, which is exactly what this movie manages to be.