Today Twiplomacy came out with their annual report on the most influential world leaders in the Twitterverse. President Obama is the most followed world leader with over 56 million followers. Pope Francis was second with 19.5 million followers. But the tables turned when it came to influence. Pope Francis was crowned most influential with each of his tweets being retweeted an average of 9,929 times; eight times more than second place finisher King Salman of Saudi Arabia. President Obama placed in fourth. 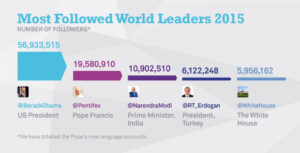 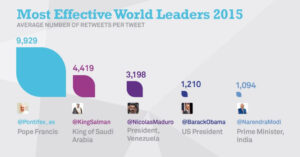 According to the study:

For many diplomats Twitter has become a powerful channel for digital diplomacy and 21st century statecraft and not all Twitter exchanges are diplomatic, real world differences are playing out on Twitter and sometimes end up in hashtag wars between embassies and foreign ministries.

As examples the study mentions that during the Iran nuclear disarmament talks Twitter was the preferred social media channel for negotiating parties to update the media and public on negotiations and that Hillary Clinton used Twitter and YouTube exclusively to announce her 2016 presidential bid.

The report also states more than 4,100 embassies and ambassadors, 193 UN member countries and 172 heads of state and government are on Twitter.

Governments are typically slow to embrace new technologies and forms of communications, but in the matter of a few years Twitter has become an essential part of the government toolkit. Perhaps a little too late as Twitter falls out of favour with the general public.