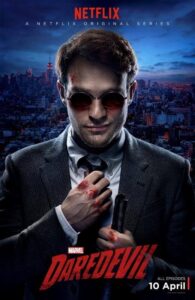 “I respect your conviction. The lone man who thinks he can make a difference. You and I have a lot in common” – Wilson Fisk

Move aside Ben Affleck, and hello Charlie Cox. Marvel has once again proven that they have the upper hand in the comic book world as they partnered with Netflix to offer us this dark, brutal, and gritty adaptation of Daredevil. A blind lawyer with heightened senses becomes a vigilante in an attempt to punish the people responsible for the corruption in his city. As Matt Murdock (Charlie Cox) uses his skills as Daredevil to fight crime in Hell’s Kitchen and take down the crime lord Wilson Fisk, he soon discovers that identifying a hero from a villain is not as clear-cut as he otherwise believed.

The actor’s portrayal of his character is simply incredible. The showrunners have managed to incorporate the violent world in which Murdock lives into the family-friendly Marvel Cinematic Universe, which is an accomplishment in and of itself. Cox also portrays the character’s dual personalities in such an astounding manner, it’s often difficult to believe that Daredevil and Murdoch are one and the same.

Speaking of performances, Vincent D’Onofrio plays Daredevil’s iconic arch-nemesis, Wilson Fisk – a.k.a. The Kingpin. His performance is based on what makes Marvel’s Daredevil such an awesome show: the line between good and evil is blurred. Indeed, the villains on this show aren’t your typical bad guys who want to destroy the world or rule an empire. They have good intentions, respect one another, and have the capability to fall in love. In fact, Fisk’s right-hand man is also his greatest friend whose loyalty exists solely through his affections for Fisk. With that said, the show doesn’t hide the fact that they’re crooks who deserve their punishments.

Marvel’s Daredevil also delivers an incredible but violent type of action quite similar to The Raid and The Raid 2. We’re talking about broken bones, gory stab wounds, and decapitations. We don’t recommend Marvel’s Daredevil to the faint-hearted. Unless you can overlook the gore, this well-made and exhilarating Netflix exclusive may prove to be a little too daunting.