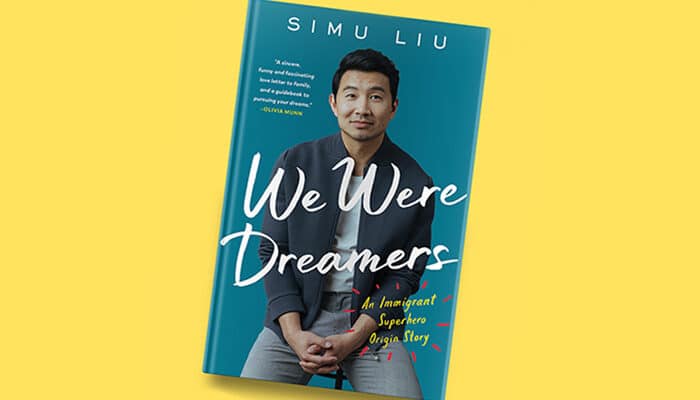 Shang-Chi star Simu Liu is about to drop his new book. Here’s Kevin Bourne with his Simu Liu book review for “We Were Dreamers”.

The release of Canadian actor, Simu Liu’s book “We Were Dreamers: An Immigrant Superhero Origin Story” is just around the corner. The book tells the story of his family’s journey from China to Toronto and ultimately Hollywood.

Let me say right off the bat, this book impacted me. Reviews are supposed to be impersonable and objective, but let’s throw that out the window for a second. A few pages into the prologue I found myself getting choked up because I felt like Simu Liu’s story was my story. He’s a normal guy that grew up in an immigrant family, in the same city as me (Mississauga), and made it at the highest level. In reading his story, immediately my dreams felt possible; within reach. Like your favourite superhero, within the first few pages, this book made me feel like I could do anything.

Like many of ours, Liu’s story is unlikely. He was born in China prior to its ascent to global superpower, immigrated to Kingston and then Toronto, and became an actor in a time when roles for Asian actors were few and far between.

Although his particular immigrant origin story begins in China, it’s a story that any child growing up in an immigrant family will relate to―having to grapple with your parents’ expectations, oftentimes feeling invisible or excluded in North American society, and having to take your “weird” and sometimes “stinky” ethnic food to school.

Not only will people raised in immigrant families relate to Liu’s story, but anyone with a dream. The idea of pursuing your dream is almost frowned upon in today’s society and seen as flaky, but “We Were Dreamers” drives home the importance of betting on yourself and pursuing a life you can be passionate about. It’s a cautionary tale to parents today about the importance of love and support for your children and the importance of guiding them as they pursue their passions. It’s also a reminder that everything has meaning―every win, loss, disappointment, relationship, open and closed door. They offer lessons that act as sign posts to guide you along your path.

In perhaps the most powerful line in the whole book, Liu notes, “…it is one thing to have a dream and another altogether to own it―boldly, fearlessly―in its entirety.”

This is the crux of the story. Success isn’t for superheroes or a special talented few with good looks; it’s for anyone who is willing to dream and apply the work and determination required to make it a reality. That’s the real superpower. For our parents that looked like leaving the only country they knew as home to venture to a country they knew nothing about. For us, it’s pursuing a vocation and life we’re passionate about.

“We Were Dreamers” is easily one of the best books I’ve ever read and is even worth a second and third read. In the end, this book will leave you challenged to work harder, dream bigger, and simply hold on for dear life during the ups and downs of your life and career. It’s an invitation to dream again or perhaps in some cases, to dream for the first time.

“We Were Dreamers: An Immigrant Superhero Origin Story” drops May 17th.