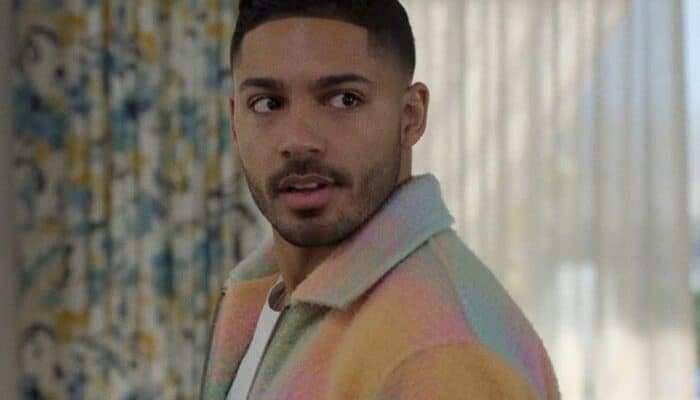 Liv and Wade. Jordan and Layla. Dillon and Spencer. Coop and Patience. So much drama on tonight’s episode of All American. Here’s our All American season 4 episode 16 recap.

Our All American season 4 episode 16 recap begins with Wade who is still salty about Jordan getting the win in the last game. Jordan tries to clear the air, but Wade makes it clear they’re not friends.

As Layla and Patience are working on the album, both Sabine and Sky each show up at the door setting the stage for a messy love triangle (or square).

Billy has trouble juggling principal and coaching duties, but Preach comes through with some timely wisdom that reminds Billy to not lose focus of the role that’s most important to him―husband. He decides to throw a not so random act of kindness her way Laura to show her that he cares.

Meanwhle, Grace is concerned about Dillon when he starts acting up. Spencer tries to talk to him, but he isn’t having it. It turns out his art teacher, Mr. Handelman, told him his art wasn’t good. In the end, Spencer decides to use one of Dillon’s drawings as inspiration for his branding which gets Dillon back on track.

Liv continues to chase her story about NIL deals by interviewing Wade after she finds out about his deal with an aviation company after he missed a game to be at a sponsorship event. The article causes some conflict between Liv and Jordan after Wade confronts him about his interview with Liv. She turns to her mom for comfort leading to a nice heart to heart mother-daughter moment. But things are still looking up for Jordan as QB #2 continues to nurse an injury, with Jordan taking his spot on the depth chart.

Later in the episode, Jordan and Layla get locked in the studio. They end up arguing and pulling no punches. Layla calls out Jordan for wanting to be liked by everyone, while Jordan calls out Layla sleeping around and not being okay after the incident with Carrie. Not only do the two draw closer to each other, but we finally learn the full story about what happened to Carrie. Jordan realizes he lost confidence since high school and Layla admits she’s still angry at both Carrie and herslf. After the conversation with Layla, Jordan gets the guts to confronts Wade.

While Layla misses Patience’s album release party, it’s still a success, but with it’s own set of drama. Coop is jealous of Patience’s growing friendship with Sabine, while Patience is jealous of Coop’s relationship with Miss Marita’s grand-daughter Sky.

One of the final scenes is of a message circulating about Liv being a “sneaky skank” setting the scene for next episode. Spencer hasn’t had to get involved in the Wade and Liv drama just yet, but will he have to soon? We’ll have to see.