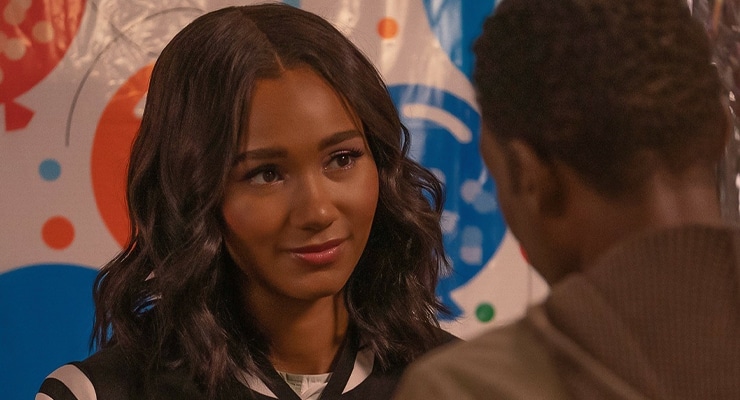 While the season four premiere of All American answered a lot of questions, including whether Coop would live or die and who would win the state championship, there are some questions and details that are still up in the air. Although there’s less drama in this episode than the premiere, we’re being set up for some on the edge of our seat storytelling and we’re here for it.

Will Coach Baker and Spencer reconcile?

Front and centre on this episode is the decayed relationship between Coach Baker and Spencer, with Liv in the middle. The episode opens with Spencer and Liv exploring the more “passionate” side of their relationship when the subject of the tension between Billy and Spencer comes up.

Later in the episode, this leads to an interaction between Jordan and his father where his daddy issues come to the forefront as he talks about playing second fiddle to Spencer not only on the field, but in his father’s life, calling Spencer his “son”. He notes that the reason Billy is upset with Spencer is because he expects the best from him, while he expects him to be a screw up. While there’s truth to this, the goal is to push Billy to talk with Spencer.

Obviously, Billy and Spencer will reconcile at some point. There’s too much love and respect between the two two stay salty forever.

While older and seemingly rock solid relationships are teetering on the verge of disaster, this episode also explores some new relationships. First, we finally meet Patience’s father as he expresses his concern over Coop’s decision making and how it may affect Patience. This leads to tension between Coop and Patience, carried over from episode one where Patience similarly observed how Coop’s decisions affects those around her.

This leads to a new connection between Coop and Asher as they bond over having to face the consequences to their actions. Asher looks to get a second opinion on his high school football career ending injury as a last resort, while Coop deals with the effects of his injuries that may affect her rap career.

How are you doing?

Meanwhile, as she celebrates her birthday, Layla grows tired of everyone wondering if she’s okay after the events of episode one that saw her and a tormented Carrie standing on a ledge during a suicide attempt. In the end, she decides to take her power back and exert her adulthood by going to the firing range and learning to use a gun. Although it was hinted at during the season four premiere, we have yet to see how he incident with Carrie has really affected Layla, nor do we fully understand what actually happened that night. Either way, we’ll find out soon.

All American airs Mondays at 8pm EST on Showcase in Canada and on The CW in the United States.