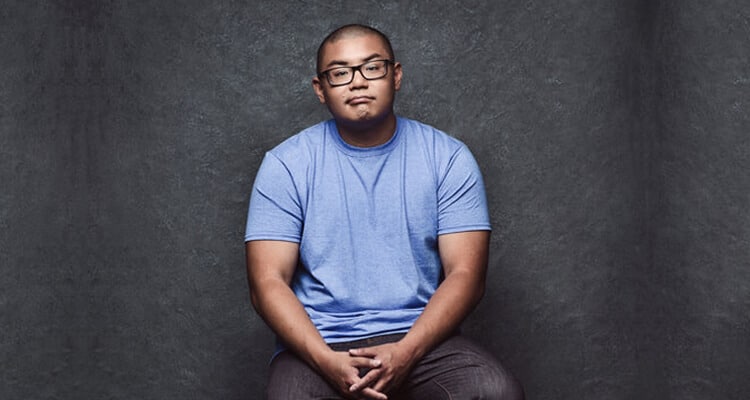 For decades, Canada has produced some of the brightest comedic talent in the world, from John Candy to Tom Green. But while the United States has been home to comedians of all colours and ethnicities, here in Canada our biggest comedic stars have been…white, with comics like Russell Peters being the exception. But with the popularity of shows like Kim’s Convenience and Canadian comedy institution This Hour Has 22 Minutes adding some colour to their cast in recent years, the tide may in fact be turning.

Here enters Taiwanese-Canadian comedian, Ed Hill – one of the talents helping to change the face of comedy in Canada. In recent years, the Vancouver-raised performer has been building an impressive resume for himself, racking up his fair share of accolades along the way. In 2016, he was voted “Best Vancouver Comedian of 2016” by Vancouver Courier Magazine and “Best Vancouver Comedian of 2015” by Vancouver Courier Magazine and The Georgia Straight, and was named “Comic to Watch” in 2018 by Reader’s Digest Magazine. He has also appeared on AXS TV’s Gotham Comedy Live, FOX’s Laughs, Bite TV’s Stand up & Bite Me, and XM Radio’s Laugh Attack and has performed on stages all over the world, including the Just For Laughs Northwest Comedy Festival, Comedy Masala in Singapore, Live Comedy Club in Taiwan, the Hong Kong Comedy Festival, NXNE, and the San Francisco Comedy Festival. With these successes in the rear view mirror, Hill now has his sights set on his biggest undertaking to date.

On March 2nd, Hill released his first comedy special titled Candy & Smiley, named after his parents who inspire a lot of the material for the production. The move makes him the first comedian of Taiwanese-Canadian descent to release a full one hour comedy special.

With the special being in the works for over a year, the COVID-19 pandemic forced Hill and his team to pivot and get creative, exploring a new and unique format for the Comedy Dynamics-produced special. What they landed on was an intimate show performed among a circle of family and friends, including Alleli “The Work Friend”, PJ “The Best Friend”, John “The Family Friend”, and Tim “The Cousin Who’s Always Late”. Borrowed from family circles found in Indigenous culture, the result was the most intimate and personal comedy experience we’ve seen to date as Hill provides insight into the Taiwanese-Canadian experience, from him being married to a white woman to his community’s obsession with piano lessons and Kumon.

The special opens with a dramatic piano solo that immediately tugs on your emotions and sets the tone for the experience ahead, and it ends on the same note as Candy and Smiley emerge from off camera after Hill notes, “I’m not Ed Hill. I’m not Edward Chen. I’m more than all of that. I’m Candy and Smiley.” As the special unfolds, it is clear that Candy and Smiley are Hill’s heroes and by the end they feel like your parents and heroes as the viewer, worthy of a standing ovation in their own right. With its strong rewatch value, the show is equal parts thought-provoking commentary and tear-jerker that may leave you both thinking and wanting to find the nearest tissue box. In a time where hate crimes against Asian people are on the rise across North America, this special is a well-needed window into an aspect of Canadian life that we have rarely seen depicted on the small screen before and reminds us that while there are very unique and distinct aspects to our individual cultures, there are also universal experiences that we all share as human beings.

While all comedians are storytellers and social commentators, Ed Hill does it in such a personal and intimate way that pulls you into his world and makes you feel like you’re an extended member of his circle. Despite his growing list of accomplishments, he is clearly a smart and highly intelligent comedian who is still a slept on talent, especially here at home. Perhaps after this special, Canada will wake up and he will finally get the full recognition her deserves.