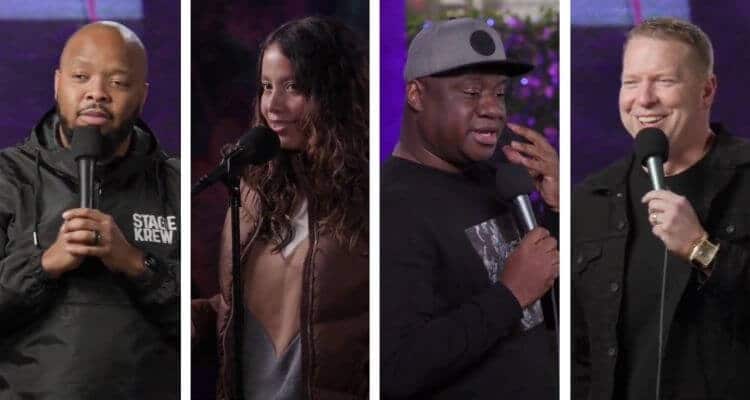 The COVID-19 pandemic has put a damper on live entertainment all over the world, from live music to sporting events, with many savvy entrepreneurs and creators taking to social media and online streaming services to provide fans with a temporary virtual escape in a time when many need it.

One of those individuals is comedian, content creator and entrepreneur, Kevonstage, who’s roots in social media and online comedy have positioned him as one of the leading producers of comedic content over the past year.

One of his mid-pandemic ventures is the Keep Your Distance comedy show series, now 12 volumes deep, co-presented by Transit Pictures live from the new Kevonstage Studios soundstage in Los Angeles.

Opening the night was Trixx, known for his brand of ethnic comedy made popular by fellow Canadian, Russell Peters. While diving into the pandemic, as expected, he also explored generational gaps (a common theme throughout the different comedians’ sets), whether his own experience of growing up with African parents or his disdain for the next generation of soft and entitled brats.

Next up was Shapel Lacey, who stayed clear of the usual suspects of the pandemic and Donald Trump, instead choosing to take viewers into his world as a Black man who was adopted by white parents. While other comedians on the lineup would explore race, this was a refreshing perspective on the subject that we rarely see in comedy. While Lacey seemed to get off to a bit of a slow start with a few awkward moments here and there, he found a way to take an experience that many viewers wouldn’t relate to and communicate it in a way that we could all connect with, from white peoples’ bland cooking and love of scones and noogies, to his time as a competitive cheerleader. Once again, a refreshing take on race in America.

Then Darren Brand took us back to exploring generational gaps, including this generation’s inability to handle the kinds of whoopings we received as children (something many Black parents today would agree with) and this generation being stupid because of technology. He also went into some experiences many Black kids growing up in the 80’s could relate to, like getting beat until you needed to take a nap and waking up hours later in the dark. Nothing else to say except that this dude is absolutely hilarious and is a very confident and polished onstage performer.

Next to take the stage was Carmen Barton, one of two female comedians on the lineup. She brought a different kind of content relaying her experience as the mother of a gay daughter who is the “butch” in her relationship, as well as the pride of seeing her daughter with a hot and well-mannered woman. “My daughter got a bad bitch!”

Then comedian, writer and actor, Rell Battle, took us back to COVID-19 before exploring ingrained Black paranoia, the difference between Black protest and white protest, as well as today’s obsession with charcuterie boards. He was absolutely hilarious and, along wide Brand, easily got the most laughs at our viewing party.

Then the second female on the lineup took the stage–Candace Thompson, who apparently came straight from a writers’ room. She referred to the notepad on her phone for random musings to expand on and appeared unprepared, but was she really? She explored different aspects of race, including reparations, stating, “Just give me a Prius and two million Instagram followers”. From her performance, it’s clear why she’s a writer. Every musing in her phone could’ve easily been translated into its own show or piece of content. Although, the idea of a comedian going through her notepad for jokes and random musings may sound to some like a train wreck waiting to happen, in the end, what we saw was an effortless, genius-level of comedy from Thompson.

The final performer of the night was actor, comedian and podcaster, Gary Owen, easily the most recognizable face on the lineup. He explored Black Lives Matter, the Trump presidency, and the COVID-19 pandemic, even admitting that he himself had “Rona”. He even picked on Christians’ obsession with having “prayer warriors” during the pandemic. By the end, it was clear he had more in the tank and wanted to keep going, but you know what you expect from Owen and he delivered.

Then Kevonstage closed with his signature Christian brand of humour, playing the role of preacher, sermonizing based on the titles of popular Beyonce songs, from “To The Left” to “Baby Boy”, stating that Jesus is “Crazy In Love” with us. Kevonstage did a great job holding down hosting duties for the night, playing off the jokes of performers and transitioning to the next set.

Overall, it was a very personal, intimate and very well executed show and was easily one of the better comedy shows and lineups we’ve seen in recent months.