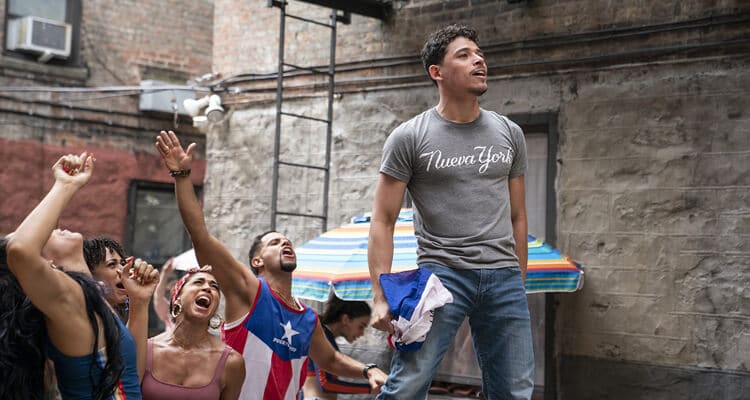 On Thursday, June 10th, Warner Bros Studios is set to release their latest film In The Heights and to say it is groundbreaking is an understatement.

Based on the popular theatre production from Lin-Manuel Miranda, In The Heights radiates joy and inspiration as it captures the dreams and aspirations of the Latin community in Washington Heights in New York City, from the young and hardworking Usnavi de la Vega (played by Anthony Ramos) to entrepreneur and father Kevin Rasario (played by Jimmy Smits).

The film obviously stands out from others as it features a full Latin ensemble cast, including Anthony Ramos, Melissa Barrera, Leslie Grace, Dascha Polanco, Jimmy Smits, Olga Merediz, and Daphne Rubin-Vega, and depicts a community and culture that we rarely see in this magnitude on the big and small screens. Aside from the strong family dynamics between generations, Latin culture is displayed through the music, which ranges from hip-hop to more traditional styles of music, as well as large choreographed dance numbers. It’s the epitome of a feel good movie and a real a dose of joy and inspiration when many need it most.

Though the film is centered around the Latinx community, it has universal themes of love and pursuing ones dreams that will resonate with any audience.

“Now that we are coming out of this pandemic where the world got jolted and we had to think about other social things that relate to inclusivity, this is going to be a little bit of joy I think audiences are going to relate to because of the universal themes – to feel community, that you want your children to do better than you…all of those things resonate well in the film.”

In The Heights will be available in theatres and to rent at home on June 10th.

Watch our full roundtable interview with the cast of In The Heights.