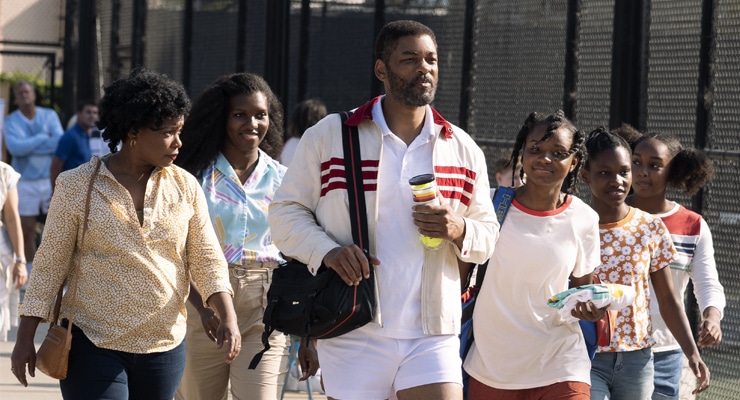 SHIFTER’s Kevin Bourne says you will leave theatres “inspired and a little choked up” in his King Richard film review.

Starring Will Smith as Richard Williams, King Richard tells the story of visionary and sometimes controversial father and coach of tennis stars Venus and Serena Williams, played by Saniyya Sidney and Demi Singleton. Directed by Reinaldo Marcus Green, the film explores Williams’ unique innovations and approaches to coaching, from the Williams’ signature open stance to practicing in the rain, that propelled his daughters to superstardom. The overarching themes are the power of dedication, hard work, trusting your instincts and betting on yourself. This is as much evident on the court as it is off the court.

While the film does a great job of depicting him as the highly protective father and coach, it also explores the more questionable sides of the man, and begs the question, “How far is too far?”

But the film isn’t just a Richard Williams movie; it’s very much a Venus and Serena movie as well. It successfully depicts the meteoric rise of Venus Williams, while the younger Serena waits in the wings for her turn. It also does an excellent job of showing both the strong friendship between the sisters, but also Serena’s growing ambitions with Richard Williams predicting she would be the greatest of all time.

A father of two superstar children of his own, Will Smith does a great job of portraying the sometimes mild mannered and polite, and other times ferocious papa bear, Richard Williams. Adding 20 pounds for the role, Smith captures Williams smallest physical attributes and mannerisms, from his beard to his slightly pursed lips and accent. Balancing Smith on screen is Aunjanue Ellis as the gracious yet strong Oracene Williams, a former athlete in her own right who also played a role in coaching her daughters. Together, Smith and Ellis provide a glimpse into real life relationship dynamics as the raise their family in inner city America.

Appearing in their first major roles, the onscreen chemistry between Saniyya Sidney and Demi Singleton are pure gold. Sidney has more of a starring role, shining throughout the film, but especially in the final scene where Venus Williams plays the number one seed Arantxa Sanchez Vicario at the 1998 US Open. Her youth juxtaposed against the grandeur of that stage helped to convey the raw emotion of that moment, signalling that Venus has indeed arrived.

As a biopic set in Compton, California, there is obviously no sweeping and lush landscapes, but the contrast of the streets of Compton to the tennis school in Florida really help to show how far this family has come in their pursuit of their dream. As a result, what we get is a universal rags to riches story that many viewers will be able to connect with.

Whether you’re a member of the Black community, someone pursuing a dream, or simply someone that loves a feel good rags to riches story, this film will probably leave you inspired and a little choked up so have your tissues handy.

King Richard is in theatres everywhere on November 19th.