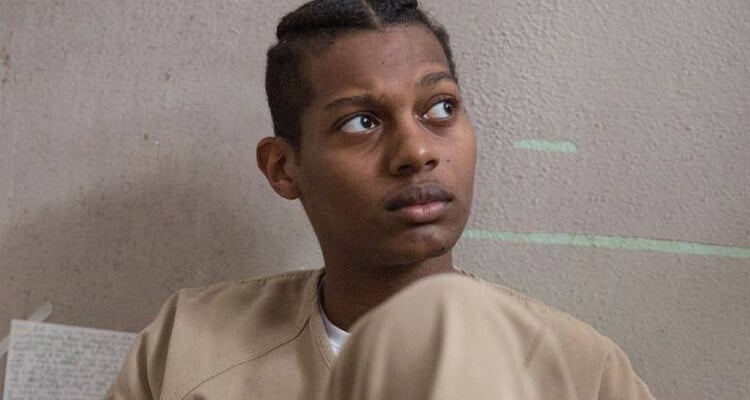 The 2021 edition of the Toronto Black Film Festival is in full swing and the first film on our radar is Foster Boy, written by Jay Paul Deratany and directed by Youssef Delara. Inspired by true events, Foster Boy tells the story of the dark side of the foster care system in the United States; a system corrupted by greed and private interests.

Shane Paul McGhie stars as Jamal, an angry young man who suffered years of sexual and physical abuse while in the foster care system. After being released from prison for his own crimes, he sets his sights on finding justice and exposing the system that was once supposed to protect him. Relunctantly coming to his aid is high-powered, and slightly out of touch, attorney, Michael Trainer, played by Matthew Modine (Stranger Things, Sancuary). Their worlds couldn’t be more far apart as they not only confront each other, but Michael is forced to confront his own prejudices and selfish ways, while Jamal is forced to confront his painful and troubled past. As their unlikely pairing helps them both to heal and evolve, together they set their gaze on confronting the corporate greed deeply embedded in the system.

One of the underlying themes in the film is prejudice as we hear both Michael and Jamal state, “Sometimes when you meet a person you don’t really see them for who they are.” Over the course of the film we see both characters shed the “three piece suit” and “thug” images as they learn to listen and work together.

While the story and writing are astounding, they are equally matched by the acting from Modine and McGhie. The prior is believable as the highly successful and out of touch lawyer, while McGhie captures the anger and distrust felt by young Black men across North America. Lex Scott Davis (Superfly, Rebel) who plays Keisha James, a member of Michael’s legal team, also shines as the intermediary or “glue girl” that brings the two allies together. Also appearing in the film are Hollywood legend Lou Gosette Jr. (Watchmen, An Officer And A Gentleman) as George Taylor, as well as July Benz (Defiance, Hawaii Five-0) and Greg Germann (Grey’s Anatomy) as corrupt corporate execs Pamela Dupree and Simon Davis.

Overall, the film is successful is highlighting a very important issue that we seldomly see on the big screen in the foster care system, with a secondary theme of prejudice that is very timely given today’s social and political climate. Also, as a film centered around the relationship between an middle aged white man and a young Black man, it is a refreshing dynamic that we need to see a lot more of onscreen.

REVIEW – CANVAS ISN’T A BLACK STORY BUT A HUMAN STORY ABOUT LOVE, LOSS AND STARTING OVER