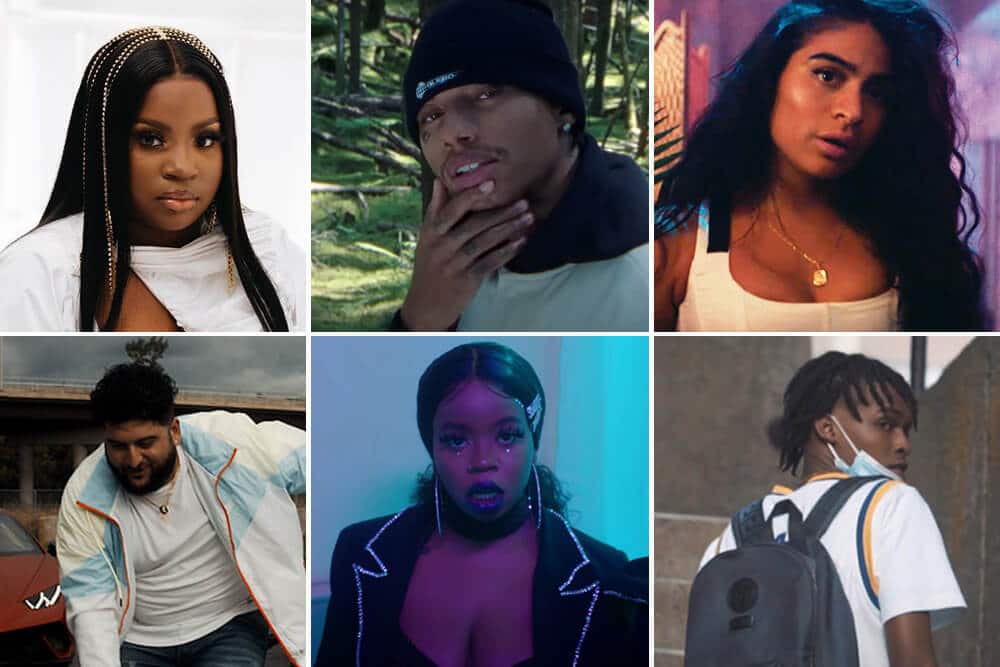 Check out the videos below in order of release date, then help us crown the top video in the country for October. Special shout out to our sponsor, realtor and Canadian hip-hop legend Greg Campbell.

Last month you voted and crowned “Floss” by Calgary’s Y.S.R as your Video of the Month.

Who will win for October?

Karl Wolf and Kardinal Offishall, two of Canada’s legends, came together for “Wolf In The Night”. It’s nice to see Wolf, who is known for the smooth island vibes, still making music at a high level.

The video was shot in Toronto with the CN Tower and the downtown skyline making an appearance. Directed and edited by Alex Gayoso, this well-shot video has a dark aesthetic, true to the message of the song.

The visuals for Cody Coyote’s “Manidoo Dewe’igan” opens by tackling the subject of bullying. We see a First Nations youth handing his bullies, who are white, a well deserved ass whooping. We then see him sitting in a circle among the elders before embracing the natural elements around him, including the water, trees, and fire. What we see are the good and bad, ups and downs of Indigenous life in Canada.

From the scenery and colour scheme, to the production and his flow, everything about Terrance Richmond’s “One Word” is soothing and therapeutic. The Vancouver rapper and Oakland native highlights the beauty of the west coast in these Aidan Fedderson and Jackson Parker directed visuals. This is a well-needed dose of inspiration from SHIFTER’s Artist of the Month for October.

Jessie Reyez returned in September with “Sugar At Night”. Both the video and song depict something many people can relate to – being in a relationship with someone while still feeling lonely. The video goes a step further in showing how suffocating these relationships can be. The storytelling in this video are absolutely on point. This was hands down one of the best videos of October.

I could be wrong, but OC34N comes across as one of those highly creative and meticulous artists who has a clear vision for their own videos. In the visuals for “Shark” we see OC34N in the mad house donning a straight jacket similar to what we saw in his video for his November 2019 release “Future Trunks”. There’s also a foggy or hazy look to the video which could be mimicking the feeling of being medicated.

What I like about OC34N is that while his videos are shot by 3FIFTYCO, which shoots a lot of the music videos coming out of Ottawa right now, his videos always look like an OC34N video instead of following whatever generic trend is in right now.

Last month, hip-hop and R&B artist Queenyy dropped her latest single “Replace Him”, off her upcoming EP, Distance. In this video, Queenyy channels some 90’s vibes with the black and white aesthetic and dance moves.

“When I wrote replace him I was in a very frustrated mood, as I only write based on real experiences I am going through at that current time. My writing was inspired by how men are always cute and try so hard in the beginning to get your attention and once they have your attention, they get too comfortable, so they stop trying to be cute”, Queenyy explains.

In a time of 4K videos and special effects, this video is a reminder that sometimes less is more.

October blessed us with visuals from another Canadian hip-hop legend, Choclair. Last month, he released visuals for the Classified produced single “Backdraft”. Shot on Temperance Lake in the 1000 Islands in Ontario, the video shows Choclair and his friends living it up during the COVID-19 pandemic.

“The concept of the video was basically showing my experiences over the Summer, trying new and different things. Because of the pandemic, we had to find different ways for recreation, so I wanted to show that in the video, It was also shot on my friend’s birthday so we wanted to show that even though things were crazy we somehow was able to enjoy Canada’s beautiful outdoors”, Choclair told SHIFTER.

Canadian hip-hop songwriter, artist, and producer The LJ returned with his new video for “Victory”. The single celebrates our successes as the Black diaspora through high-class taste and lifestyle, and reminds us to enjoy life even in uncertain times. The smooth African-Caribbean vibes are matched by the island scenery of this Toronto shot video – water, jetskis, boats, water guns, bottles and beautiful women.

After a few bigger budget videos, Tory Lanez is back in the streets with “In The Air”. The vulnerability of Lanez out on the block is matched by the vulnerability of the song where the Brampton native continues to declare his innocence in the Megan Thee Stallion shooting incident, as well as his faith in God.

“Celebrate” explores the question of celebration in 2020, a difficult year for many in light of the COVID-19 pandemic, increased racial tension, and political instability. The video shows Cheko and his friends celebrating while watch the Toronto Raptors, all in the midst of a dark cloud and dark tones. The video forces viewers to ponder some very important questions about life in 2020.

“How do we celebrate without forgetting those who can’t? Do we celebrate life even during a time when death is edging closer into every conversations?”

In mid-October, Night Lovell took to social media to announce the release of his new music video for “Alone”. True to its name, the Avery Stedman directed video shows Lovell out in the woods in solitude. We’re treated to a back and forth change of pace as we see Night Lovell at times standing and look into the camera, then speeding down a dirt road on an ATV, walking through the forest, then surrounded by flashing light. The song and video are very timely given the times we’re living in with a pandemic and social distancing.

The solitude depicted in the video is matched by the dark and menacing track, produced by Shaq France. In the song, Lovell conveys an experience felt by many who feel alone – being fed up but not feeling you can say anything to the people around you.

Toronto artist, Charmaine, has been making a lot of noise lately, especially with her single “Bold”. True to the song’s name, the Eye Blake directed video features Charmaine making a statement with bold makeup and outfits while owning exactly who she is. This rapper, songwriter and vocalist is completely raw, sexual and unfiltered, and not afraid to say what she wants. But if you look deeper, there’s an underlying message of empowerment and flaunting what you got.

This is a highly artistic video from the minds of Naskademini and Tika. Gotta to the black and white aesthetic, minimalism, and beautiful Black bodies. For this release, the now Montreal-based songwriter, film composer, model and curator, took a moment of pain and insecurity and channeled it into her latest offering.

“‘Sideways’ was cultivated from a vulnerable place of immense pain when I was feeling a great deal of shame for making a mistake with a friend. I didn’t know what to do because I felt that I had ruined the relationship to the point of not turning back. It made me feel unbalanced and insecure”, she says of her new single.

With the mid-October release of “Pair of Wings”, JRDN, Knotez and O’Sound remind us of the loved ones we’ve lost.

Shot in the housing projects in Halifax, the video shows real people living everyday life in the Atlantic city. It’s an inspirational song and video, in contrast to the mainstream R&B music and video we see typically see today. This isn’t just R&B, it’s soul, and this video and song have a lot of it.

In October, JAIoftheRise released his fourth music video of the year with “Situationship”. Shot in Montreal, this video is well done from beginning to end, from the styling and cars to the cityscape shots and transitions. JAIoftheRise always gives you those major popstar vibes, like he’s just a hit song away from blowing up.

Ask enough insiders in the Ottawa music scene and they’ll tell you FTG Reggie is one of the most talented young artists in the city. Not only are young music fans excited about his trajectory, but the OGs as well.

In October, he once again teamed with Toka Dinero on their latest single “Scammas”. The video features the duo and the crew hanging out on the block and dancing. Every time these guys get to together it seems like a party.

The visuals for Maurice Moore’s “It’s On You” find Maurice Moore out for a mid-pandemic walk all by himself. Looking at the big smile on his face and the dance moves, the R&B singer-songwriter-producer doesn’t need any company to have a party.

The Weeknd
Too Late
Release date: October 22, 2020
Directed by: Cliqua

The Weeknd has been giving us those creepy vibes since the release of After Hours and the heebie-jeebies continued with his pre-Halloween visuals for “Too Late”. There appears to be all kinds of symbolism going on here with The Weeknd once again depicting the folly of Hollywood and fame.

In late October, Brampton native and SHIFTER’s Artist of the Month for June, Romeyo Wilson and Reggae artist Kim Kelly starred in the visuals for their new single “Text Me”.

The Caribbean vibes are matched by scenes of island love between Wilson and Kelly playing out a backyard party. Inspiration this song and video came from a past relationship with an ex who realized Romeyo had more to offer in comparison to the person she had left him for.

Three months after the release of “Up2Me”, which has 76K views on YouTube to date, Ottawa-based recording artist and songwriter TwoTiime has released “Bigger Issues”, his fourth official single and third music video of 2020 so far. The single recently hit #11 on the Hip-Hop/Rap iTunes charts.

The young and clearly mature beyond his years rapper talks about getting his life in order and taking care of his family before worrying about fame and jewellery on his new release.

The video opens with TwoTiime walking through his west end Ottawa neighbourhood, including a big, cinematic opening overhead shot, as well as footage of the rapper in the studio.

In the song and visuals for “Solid”, Toronto’s Savannah Ré gets vulnerable, grieving a past relationship gone wrong. We see the main character revisiting the hard times before looking back at old videos as she relives the good times. This is a very artistic and minimalist video from director Alicia K. Harris.

DillanPonders and Ruby Waters compliment each other very well, both vocally and on screen. Waters has an exceptional voice, meanwhile DillanPonders has a unique vocal and aesthetic style. Together they exude a laid back and effortless “cool”.

The Stephen Triveri directed video reminds us of the adventure and wonder of being a kid. Those were the days.

Fun fact: My son was a classmate of the main child actor in this video. Small world.

Two months after releasing the single “Six Speed”, which has earned him a coveted spot on the Northern Bars playlist and currently sits at over 80,000 streams and counting on Spotify, SVLM is back with the visuals for his latest release. With a focus on quality over quantity, SVLM doesn’t drop visuals very often, but when he does, he’s known to give audiences a big production.

With this video, SVLM reunites with director Just Jay with whom he collaborated on “405” back in 2018. The pair channel the Fast & the Furious movie franchise in this video, including beautiful women, fast cars, and motorcycles.

SVLM also flexes his comedic muscle as he gets his Eddie Murphy on, playing multiple characters at once.