Canada’s capital city, Ottawa, isn’t typically known as a hotbed for hip-hop culture but it’s slowly carving out its own niche. At first glance you’d ask what a government town like Ottawa would know about hip-hop but when you really think about it, it’s a match made in heaven. Hip-hop started as a non-violent way to express your thoughts on what was going on around you. It was social commentary at its finest; it was intelligent, angry, political, and rebellious. As the national gathering place for the country’s politicians and bureaucrats, there’s already a bit of an irreverent f*@! you, anti-government undercurrent in the nation’s capital. And far from large commercial centres like Toronto, New York and Los Angeles, Ottawa’s creatives aren’t really trying to impress anybody. This is the perfect breeding ground for hip-hop in its purest form.

This brings us to this past weekend and the latest installment of the House of Paint Festival of Arts and Culture. Now in its 13th year, HOP is one of the hidden gems among music and arts festivals in North America. Every true hip-hop fan needs to make this annual pilgrimage if only to be reminded of why they fell in love with this culture; that’s what it did for me. This year’s theme was “Decolonize” which weaved together the different events into one cohesive experience. To be honest, I experienced contrasting emotions at HOP- joy and pain, sunshine and rain (okay, bad joke). On one side of the coin, it was exhilarating to remember the tracks, emcees and punchlines that used to make me bob my head and get that mean mug look on my face. On the other side of coin, I got to see how far hip-hop has evolved, for better or worse.

HOP delivers so much more than music. The festival started with the 0G 500 Poetry Slam at the Gladstone Theatre featuring Sarah MK and X-WAM. Friday night was the DMC Canada regional DJ battle with performances from DJ Zattar, Illa J and Canadian hip-hop legend, Dan-e-o. The festival closed on Sunday with a knowledge conference where up and comers got to learn about poetry, dance and hip-hop culture from the the Rock Steady Crew and other panelists. 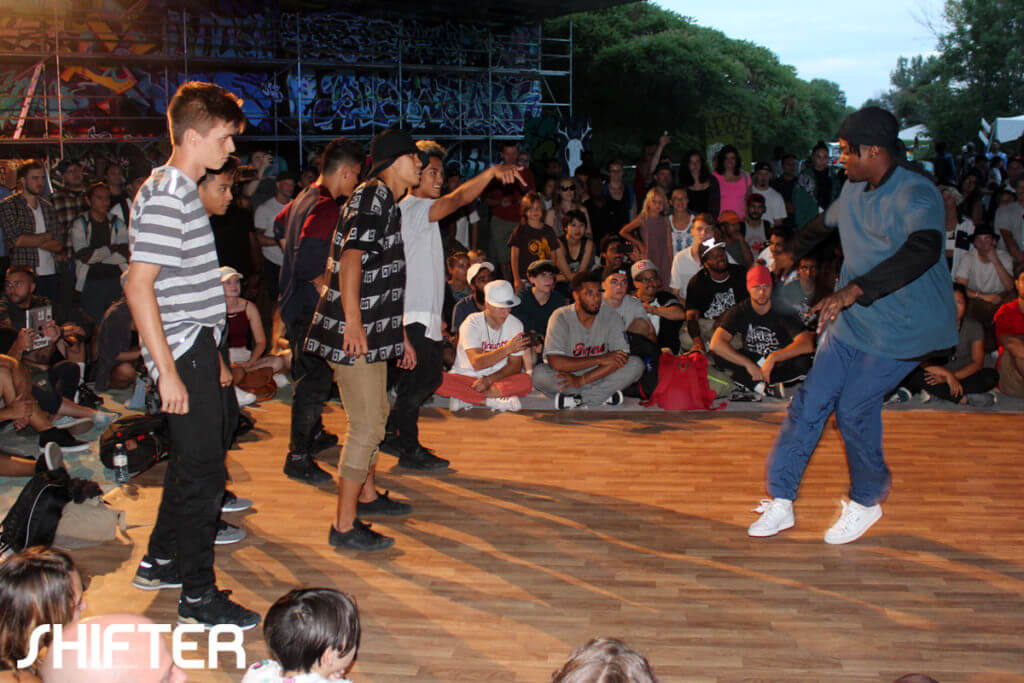 At the main event, the Saturday night battles, we were surrounded by the four elements of the culture- graffiti, DJing, rap, and break dancing. Under the Dunbar Bridge in Ottawa’s Brewer Park scaffolds lined the walls as graffiti artists created. Dance crews and poppers from across Canada battled in front of legendary judges Crazy Legs and Sweepy of the Rock Steady Crew. Meanwhile, fellow Rock Steady member DJ Fable was spinning. It was in this moment that I was reminded that hip-hop was really an artistic and creative movement; the art gave people a release and it brought people together.

The following night another legendary hip-hop group took centre stage. As Parrish Smith and Erick Sermon, also known as EPMD, got on the mic I didn’t know what to expect. I didn’t doubt their ability to rock a crowd; I doubted whether young hip-hop fans who grew up on Kanye West and 2 Chainz would be able to appreciate this classic act. Not only did they appreciate the music, but they knew every word to boom bap classics like Da Joint and Symphony 2000. I stood corrected.

House of Paint is a welcome annual dose of real hip-hop and it’s found a perfect home in Canada’s capital city. It reminds us of the power of creative protest. It reminds us of how impactful art and creativity can be in bringing change and bringing people together.