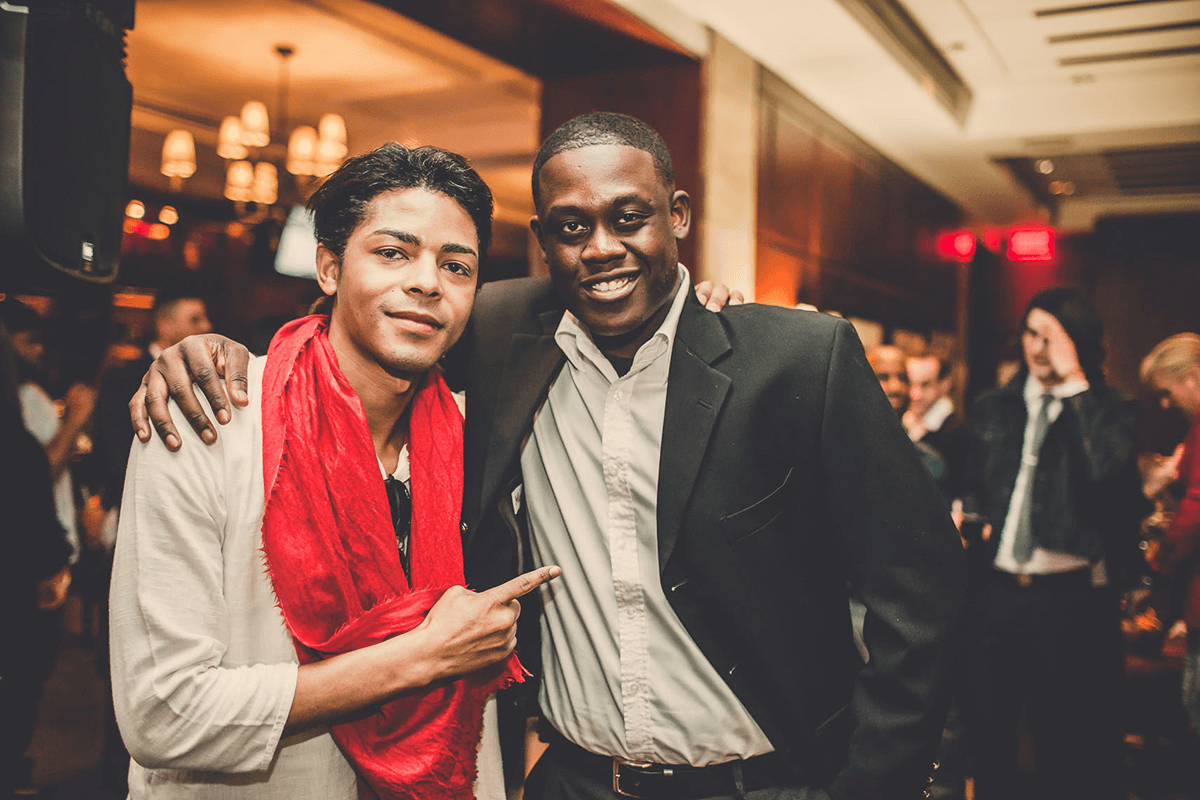 Our Koliah Bourne and Vlad Jean-Gilles had a chance to chat with platinum-selling artist B. Howard at a private soirée at the Lac Leamy Hilton in Gatineau, Quebec. They got to know more about the man with a mission to uplift and inspire.

Koliah: Alright so we are here at hotel Lac Leamy with B. Howard. So welcome to Ottawa or is this your first time here?

B: This is definitely my first time and thank you for the welcome. Truly enjoying Ottawa and it’s very beautiful. Very clean and very brisk when you get off the airport.

B: L.A. and then New York so it’s not that bad but still brisk. I’ve seen like five piles of ice.

K: That is our beloved Ottawa. So you’re here. You signed with who?

B: I did a partnership deal with King Empire and we’re going globally with it and then I also have Phil Quartararo as my manager. He was the president of Warner Bros., Richard Branson’s guy at Virgin, he’s responsible for a lot of people, and so I just put together a great team to launch my new single “One More Night” and I’m super excited.

B: It’s cool being here and no one’s heard the music yet and we just turned the whole hotel into a party room.

K: Yeah it’s awesome. So tell me a little bit about your start. What made you get into music, that’s what we’re about, we want to hear your story, so what got you into this?

B: What got me into it was I only had a year to do music. You know I grew up in a musical background, but only had a year and I ended up placing songs with Dru Hill and Ginuwine at the end of the year. Then I did Ne-Yo and Missy Elliott and all those guys later. So it really worked out well for me, you know, as far as producing and writing. Then moving on to becoming a forefront artist, I did a song with Marques Houston and they kept my vocals on the song for the background. From there interest grew and after that released a song called ‘Ke Nako’ in South Africa endorsed by Mandela. From there I did a record deal with Universal Japan and was very successful and now I’m moving it back to the States.

B: Along the way it’s been a great journey; great experience. I can’t be more happier with the path I’ve taken to go to this level and go further.

B: Not of this earth.

K: You want to get to heaven.

B: I wanna go back home.

K: You have a song called “Ananda”. Explain a little bit about that song. I really enjoyed that song.

B: Thank you so much. You know that’s a rare thing. A lot of people don’t ask about that. I love that. Thank you so much. Ananda means “peace” and “bliss”. It’s a song created with my friend Jan Fairchild. He was an engineer and we got together and collaborated, and there was something very spiritual about the song. It seemed to almost just float through. My friend Julien Hassan and I just wrote on the song and I don’t know when it was time for credit to come in. I couldn’t give credit to anybody except for the energy. You know it was definitely like pure; it was definitely from the heart. It was definitely unexpected and I didn’t realize how much the choir- you know the choir there was a variety of people I was able to get together for the choir. We all didn’t want credit on there. We did it for the love. It was a love song.

K: It was a beautiful song.

K: We are definitely looking for that depth of quality when we’re looking at music and that song has depth in it.

B: Thank you so much. Like, if you listen to “One More Night” –“Truth is in your eyes, let the night be filled with light, shining down. Don’t you give in; lift your feet off the ground. Give into the motion; see every sound. You can see clearly now, let go, learn what it means to fly. Only if you believe, feel no gravity let the music take you high.” You know, I wanted that song to really uplift people. I think a lot of songs are social conditioning, thus me doing this partnership with Angie; you know sometimes you get put into a box, to sing songs you have to have people who genuinely believe in you and Angie, my friend for a while, and we’ve been doing this together. You know we made new stuff that will be able to transcend through all music. Not necessarily having to have a sexual orientation, but an uplifting and positive vibration. You know to uplift people during these times, to inspire people to do better. Inspire people to continue on. A lot of music is depressing. I party you know, but the tone of the music is pulling you down and I want to bring people up with my music.

K: That’s awesome. We appreciate that at SHIFT. That’s a part of what we’re about. We wanna see people who are shifting culture and it sounds like you’re shifting culture in music. Sounds like you want to see something different. You’ve seen something out there that a lot of us have experienced and we want to see something better. So kudos to you, bravo to you and that being your mission.

Vlad: You’ve also worked with artists like Ne-Yo. What was it like working with him? How has it impacted you as an artist or your understanding of how the music world works?

B: Working with Ne-Yo and Trey Songs and various other others, Miguel, it’s an experience. We both gave to each other, but me as a producer- moulding and giving direction on where to go to the next level. At the time, they were building and to be a part of that building block and to continue our relationship is very much been a cool thing. I believed in a lot of them when no one believed in them. There was a time when Miguel wasn’t that known and people weren’t favourable of him, but I really loved Miguel. I saw what he could be and what he could do. Jason Derulo is another friend, and we recently got back in the studio. When he first started writing, we were doing Making the Band–Donnie [Making the Band 4] and Jason Derulo is one person that I saw the work ethic he has and the passion and the love he had for music; and we worked together, and we became good friends, again like Angie, so now we’re creating together and making hit songs.

V: Tell me about the artists that you’d like to work with in the future.

B: The ones I want to work with in the future, I can only let energy guide me on that situation. Unfortunately, I feel like a lot of the artists on the radio, I feel like they’re watering themselves down. People say they are not talented but everyone who has a deal, everyone who’s working, they have talent. They have a voice; they have a sound. Maybe they sing like Whitney Houston or maybe they don’t sing that much at all, but they have a talent. I feel like they’re controlled more on what they can say. If you notice, when you listen on the radio at the beginning they’re not saying very much, but towards the end of the song, they’re going in lyrically. They’re showing their talent. They’re showing that, “Hey I may be pretending to be like I’m dumb but I’m very intelligent”. They are very intelligent and not showing all of their talent, which I think they could. And that’s why with this situation with Angie, I’m able to show different dynamics. I can make an Africa song one day and then make another song another way…that’s the way it works.

K: Well, something on a lighter side, just to kind of close the interview. You don’t like pork, but what do you like? What’s your favourite food?

B: Fruits, vegetables, fish, chicken…I have a sinful passion for Popeye’s fried chicken, extra spicy. I’m sorry. I go to Whole Foods and do the whole nine, but I like fried chicken.

(Koliah and Vlad are all smiles and laughs )

K: I’m going to call that the end. Awesome to meet you.