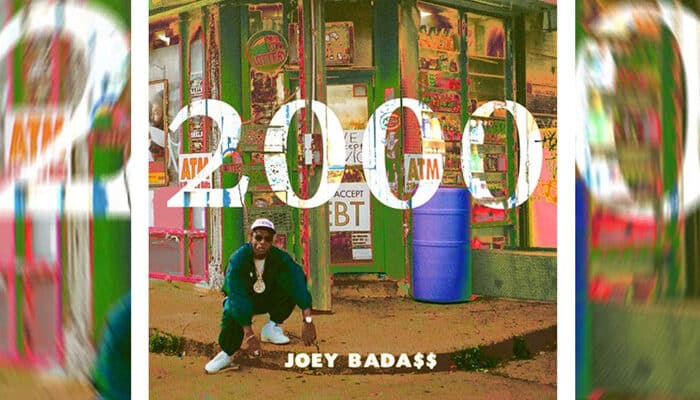 New York MC, Joey Bada$$, has evolved as an artist in recent years. Aside from being a rapper and fashion icon, he has expanded into acting in Wu-tang: An American Saga and the Academy Award-winning short film Two Distant Strangers. He has also treated fans to a few singles, features and a popular Colors performance of “Head High”.

Now the Brooklyn native is back with his latest album 2000, his first full-length project in five years. The album is a follow up to his 2017 release ALL AMERIKKKAN BADA$$ and the offspring of his 2012 debut mixtape 1999.

The album opens with “The Baddest” featuring Diddy (get it ‘Bad Boy’ and ‘Bada$$?) as the mogul turned artist shouts out New York City. On the soulful piano laden track Bada$$ addresses the five year gap since his last project.

I can take five years off ’cause my shit is timeless
My core got my back so I’m standing on my promise
These niggas only backed by they label, they all spineless
I’m backed by popular demand and on that timing

Right out the gate he reveals why he’s one of the top lyricists in hip-hop today. He states as much, declaring himself, Kendrick Lamar and J. Cole the holy trinity of hip-hop. The album is a reimagining of New York hip-hop, including the Diddy-esque R&B bounce later in the track, but for a new audience, and this track sets the tone.

Aside from previously released singles “Where I Belong”, “Zipcodes”, “Head High” and “Survivors Guilt”, one of the standout tracks is “Eulogy”, a throwback to Golden Era, New York hip-hop with its strong lyrics and messages while managing to not sound preachy and corny. This is one of those songs that give you that “feeling”, reminding you of why you fell in love with hip-hop. He follows the same formula on “Wanna Be Loved” and “Make Me Feel”, providing hip-hop heads with a bit of nostalgia and yearning for a lost period and sound in hip-hop.

Almost equally impressive as the bars are the features, including Westside Gunn, and his signature “Boom, boom, boom, boom, boom” adlibs on “Brand New 911”, Chris Brown and Capella Grey on “Welcome Back”, JID on “Wanna Be Loved”, and Larry June on “One Of Us”, with its 90’s R&B/hip-hop vibes.

What Joey Bada$$ promised to deliver in the opening bar is exactly what he gives us―timeless music. He’s like that elder that won’t let us forget the traditions of our ancestors. Not only is this project a time capsule reminding us of the days when New York hip-hop was king, but in 2000, Bada$$ provides fans with something Kendrick couldn’t―an artistically and lyrically elevated project that is still pretty accessible to the average hip-hop listener.

Where in the past venturing into acting has led to a steady decline in a rapper’s career, it’s clear that Joey Bada$$’ pen is still sharp, fans still want to hear what he has to say, and he has infinite potential to grow and elevate in his craft.

2000 is available now on all major streaming platforms.