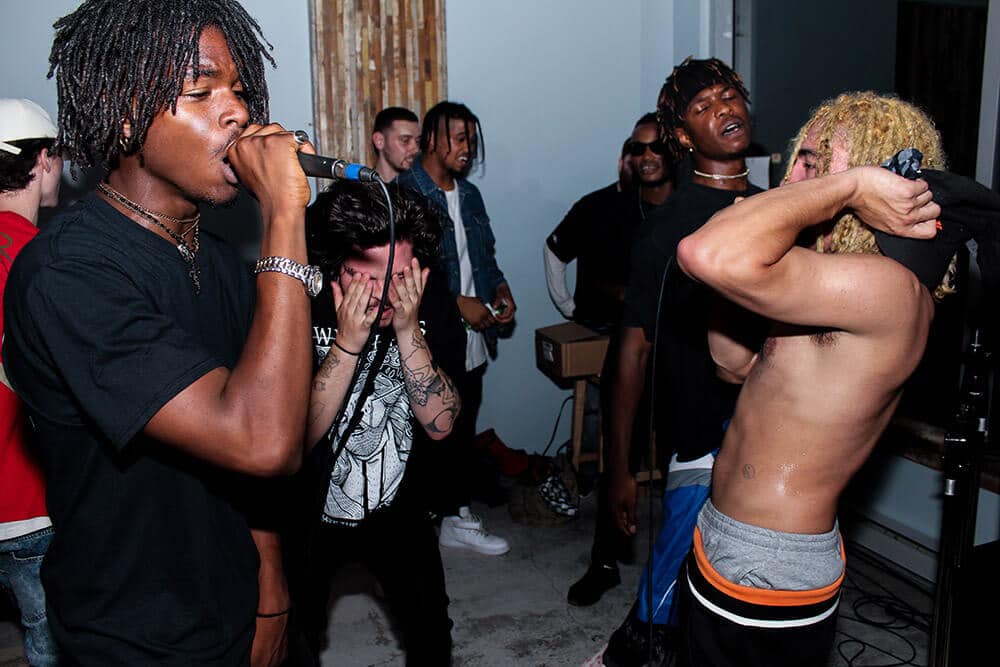 MARVEST AT CITYFOLK – MORRIS OGBOWU, RBLx AT THE UNREFINED OLIVE

Similar to Friday night, after planning to check out some of the bigger names at CityFolk, I chose instead to see some of the lesser known, local acts. But this time instead of staying on the festival grounds at Lansdowne Park I went out onto Bank Street to check out a few of the Marvest shows.

Marvest is an offshoot of CityFolk featuring shows by local artists at small venues all along Bank Street in an effort to create a bit of a SXSW vibe. It’s a musical harvest that presents “a feast of locally produced music”.

After seeing a few folk rock acts over the previous few days, it was time to check out some local hip-hop.

Performing at The Unrefined Olive, Morris Ogbowu brought an African flavour of hip-hop that I’d never heard before and it was quite refreshing. His music is influenced by back home, Nigeria, and is both unashamedly African and unashamedly hip-hop. Often in hip-hop artists just jump on the latest wave and follow the mold of the moment. Ogbowu’s authenticity made you feel like you were experiencing real art.

Even in his outfit for the night, a black turtle neck with a thin gold chain, he didn’t look like your typical rapper. There was a smoothness and artistry about him. As he performed I said to myself, “If Marvin Gaye did hip-hop he’d be like Morris Ogbowu”.

Now the show wasn’t polished- he performed songs that were a work in progress- but that’s the difference between CityFolk and Marvest. The show was intimate and Ogbowu allowed the audience to be a part of his creative process.

At one point he invited fellow local rapper, Black Irish, to perform a few songs (they were together when Morris Ogbowu found out he’d be performing at Marvest). Unlike many hip-hop performers, Black Irish had an engaging stage presence and was great at working the audience. With his big personality I felt like I was watching Lil’ Uzi perform.

The highlight was when Morris Ogbowu performed his song “La La Land” off his upcoming EP. Again, it doesn’t sound like typical your hip-hop song. It’s an anthem, something you might expect from fellow African-Canadian artist K’Naan, and although I couldn’t make out all the lyrics, the music alone was inspirational.

Just like the early tracks he performed, I think Ogbowu’s sound is still a work in progress, but as he defines his lane over the next few years I’m sure you’ll be hearing a lot about him.

The good thing about Marvest is you get to see up and coming artists perform in intimate venues before they blow up so I was excited to check out RBLx. This was my second time seeing them perform live and I liked what I saw the first time (since then group member SVDVM had a viral hit with his song “Auston Matthews“).

My first observation seeing them perform for a second time was that these guys are stars, simply put.

Now I’ll be the first to admit it took me a while to embrace the new wave of hip-hop (I’ve been listening to hip-hop since the ’80’s) but I’ve come around. I respect anybody who produces quality music and takes their craft seriously and I get that sense from RBLx.

One thing I can respect about newer groups, like Migos, is that they have a lot of chemistry and their friendship is one of the reasons why their music is so good. It’s the same thing with RBLx. Watching their friendship and how they interact with each other on stage is entertaining to watch.

What’s cool about them is that they seem to operate more as a collective than an actual group so you may only get two or three members on any given song. As a result, you get something a little different on every track.

The highlight for me was the song “X After Party”. The production and hook are on point. By this point in the show my head was bobbing. The guy next to me must’ve sensed my love for the song. He tapped me and said, “This song is hard, isn’t it?”

Between the venue and the crowd, it brought me back to the days of growing up in Toronto, going to basement jams at my friend’s house. It was a cool venue (an olive oil and balsamic vinegar tasting bar) and the crowd had fun (although nobody seemed to have more fun than RBLx). Overall, it was a good show.