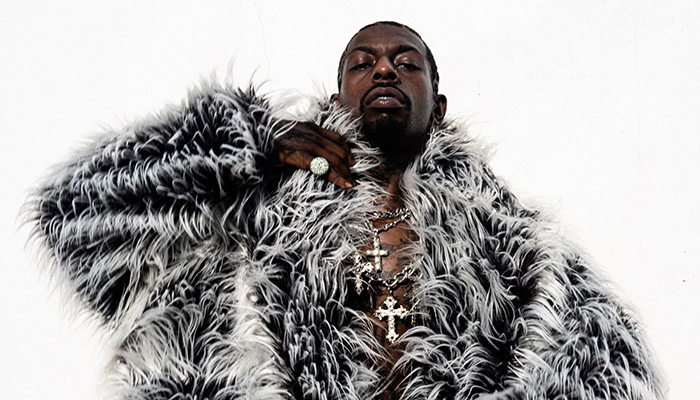 Known as one-third of the critically acclaimed psychedelic/alternative hip-hop trio, Flatbush Zombies, Brooklyn’s own Meechy Darko is writing his own story, as he introduces the hip-hop world to his debut album, Gothic Luxury. Executive-produced by legendary hip-hop producer Dot Da Genius and mixed by GRAMMY Award-winning Neal Pogue, Gothic Luxury Meechy speaks on various personal situations throughout his life and reflects on a majority of issues that go on in the world.

With features from Denzel Curry, Black Thought, Busta Rhymes, Kirk Knight, and VITA, the Brooklyn MC steps out of his comfort zone to experiment with a range of resonant sounds and energies. He abides by the braggadocious lifestyle one adopts through experiencing raw and dark environments, tackling the same issues his environment creates.

While working with Dot Da Genius, Meechy switched the style of his sound for his debut album by incorporating drawn-out piano intros and laid-back funk melding with dark mini-symphonies. When speaking more about the process and creativity of Gothic Luxury, Meechy Darko said:

“I had no choice but to make this the most personal thing I’ve ever done because fortunately or unfortunately, I’m in an extremely soul-stirring part of my life right now,” he says. “Who I was yesterday may not be who I am tomorrow. I’m not who I was last week. There’s no telling who I’ll be next year or the year after, so it’s very important to capture this while I can still feel.”

Starting with the first track, “The Genesis”, it simply introduces the Brooklyn MC’s start in life, manifesting his successes through the unorthodox practices and environments he faces. The production for this song is vivid, complete with thunderstorms echoing out in the beginning and violin, harp and piano arrangements lingering throughout.

With songs like “CURSED” & “Never Forgettin’”, Meechy sets the tone for his listeners. “CURSED” explains Meechy’s views of the perspective of revenge while “Never Forgettin’” is all about going through different phases in life, such as the Flatbush Zombies’ artist own surroundings as a rap star.

The speed of production, fast-paced lyricism and change of vocal tones dictate the raw and unique energies as he tackles issues such as seeking vengeance rather than overcoming the hate and the aspect of revenge through other means. He clarifies that he would rather flaunt his successes to his haters and enemies rather than submit to the desire for revenge. Meechy speaks about the process of becoming his own man and his willingness to take risks rather than to submit to the system that society wants him to be.

With “Never Forgettin’” he talks about showing peace and love to all around him, while still protecting his peace. He vows to protect himself against people who want to hurt him in any way possible. He explains that he will take risks show the same energy to his enemies and old friends who do him wrong, and the normalcy of violence within his community.

As the project goes further on various subject matters and raw production, Meechy incorporates a Tupac-like presence with “Kill Us All (K.U.A.)” as he touches on everything from conspiracy theories, to government and corporate overreach, to the role of media in shaping public perception. On “LAVÏ$H HABiTS (Gothika)“, Meechy details his interests in his world, such as his proclivity for violence and dark energy. He explains how the environment that he was raised in and the immaculate benefits of the entertainment industry has influenced him to take his habits to another level.

One track that stood out to me was “Get Lit or Die Tryin’”, in which Meechy’s signature raspy vocals flow alongside a serpentine beat as he weighs the pros and cons of the idea of fame. In this song, Meechy details the nightlife and the immaculate nonchalance of his fame through his lyrics, production, and storytelling as he captures what his life is like, and what he does to maintain his success. His energetic flow and vibrant energy makes the song vibe-worthy. He details his love for women, drugs, and violence through his lyrics and changes his flow to drag and slur his speed of speech, making it feel like an actual conversation with him when he’s actually in a frivolous moment.

Another unique song that caught my attention was The MoMA (feat. Black Thought), and the production felt so immaculate due to the essence of the song’s old-school boom bap beat. Meechy captures a story of a conflict of money with his friend and how they try to avoid poverty and failure by doing what they have to do to survive. Meechy’s flow, bars, and energy with his lyrics make it unique and vibrant to listen to. He speaks more on how death and violence are prevalent more than ever with the recent deaths from the pandemic and with people getting killed in street-related violence.

Philadelphia’s Black Thought delivers lots of amazing lyricism, bars, and punchlines and carries a flow for the audience to enjoy and listen to. He speaks more on his legacy as a top-tier lyricist and how he maintains his throne through his unique lyricism and consistency on the mic while maintaining the same values that he holds today.

While “PRADA U” felt similar to the other tracks mentioned, Lost Souls (feat. Denzel Curry & Busta Rhymes) sets Meechy’s level of leadership on a higher note as he delivers a unique message with his signature sound and vocals, in which he details his issues in society and what people need to do to avoid it. The production is similar to the likes of “CURSED”, “Kill Us All”, and “Never Forgettin’”, while incorporating sounds of rain and thunder in the beat. Denzel Curry delivers a captivating hook on why life can be unfair and speaks directly to God on these issues.

Curry speaks on the same message of fighting back and protecting himself to not get caught up in the warfare. Curry and Meechy trade bars on dealing with the same issues in life and having to overcome their trials and tribulations through their hard work, determination, and resilience to life in the streets and Western society. Busta Rhymes delivers a remarkable verse, in which he details what he does to contribute to society and what he does to keep going and fight for others, regardless of any situation. Busta’s slow-paced flow, intricate wordplay, and raw energy make the song more remarkable to listen to.

The album ends off with BLK Magic which is a heartfelt song that talks about the importance of Black excellence and the love for being Black. The Brooklyn rapper also detailed his support for black businesses while detailing his sacrifices for others to give them a better life. He also details the importance of spirituality and embracing his blessings, and not letting anything get in the way of his conscience.

Meechy Darko’s brand new album, Gothic Luxury, is out and available on all streaming platforms.