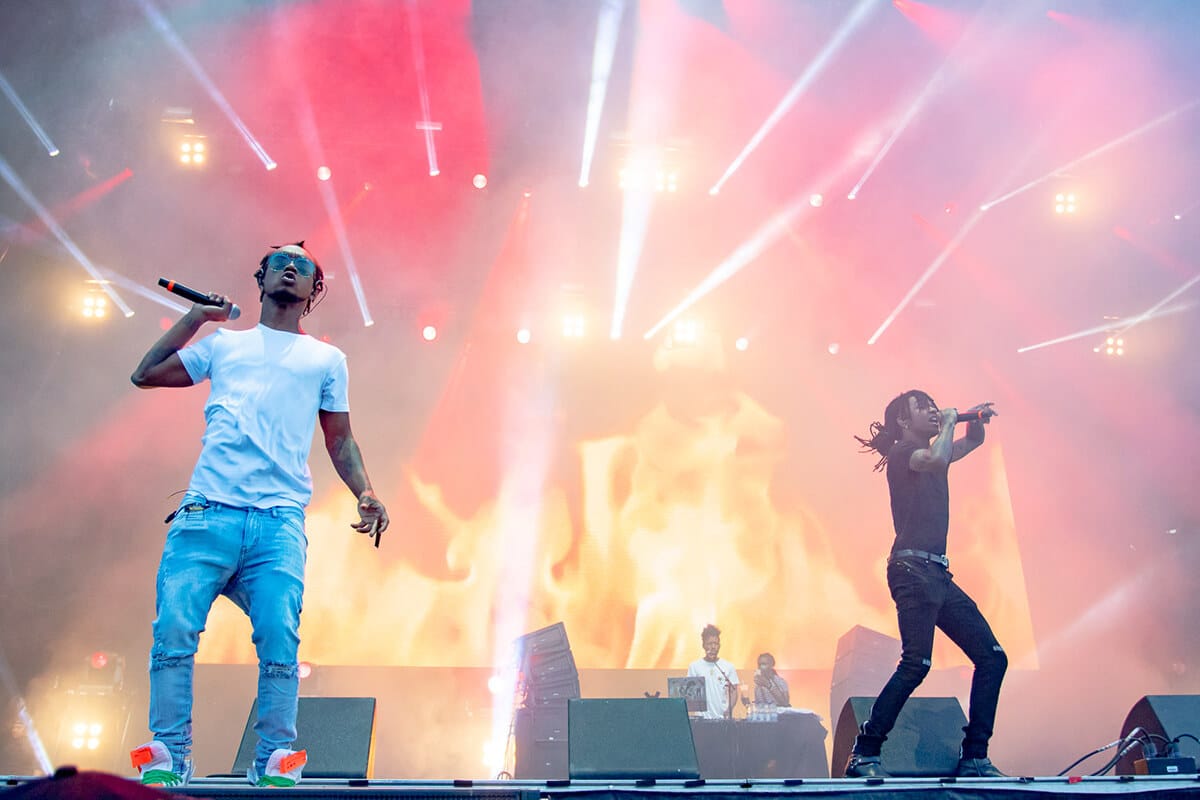 Trap artists often get flack for following a consistent formula- dreads, drug talk, similar delivery, similar production. And a lot of them lack stage presence. They tend to focus their crowd interraction around some chant that they repeat throughout their show when they don’t know what to say. “Sremm Life!”, “Mi-go!”

They started their performance with No Type and No Flex Zone (which meant the mosh pits were open). They’re both great songs and it was immediately evident why these guys are superstars. The show was good so far, but great? Nope. Just “meh”.

After a few forgettable songs, they performed Buckets. Another crazy song. For some, it’s hard to hear artists singing and rapping about drugs when kids across North America are overdosing at crisis levels, but musically it has some of the craziest production you’ll hear today. The crowd went berserk and who could blame them?

Then came one of their biggest hits off the deluxe version of their most recent project Sremm Life 2, Swang. Although Rae Sremmurd follows some of the same trap formula as other groups and artists, you can see some ways in which they set themselves apart, like Sway Lee hitting those high notes on the hook. That’s something you probably won’t hear another group try. There’s some real artistry there and evidence of their own style.

At this point they brought some girls onto the stage and it was a party. The highlights were Unforgettable and Guatemala. It was cool to hear him mix up the lyrics and sing, “We can get away to Ottawa.” Sway Lee has the perfect voice for these kinds of island vibes. When it comes to what makes Rae Sremmurd different, this is it. With today’s music everyone is a vocalist, and the bar is pretty low when it comes to vocals, but Sway Lee is probably the best singer out of the new crop of artists that blur the lines between hip-hop and R&B. And his voice allows him to go into genres like Reggae that Migos and other group can’t explore.

Before closing they performed Black Beatles and Powerglide. During Powerglide they basically stopped performing and just started dancing around while the song played. Then again on Rock ‘N Roll Hall of Fame Swae Lee ran back and forth in front of the stage and got into the crowd with fans while his vocals played in the background. Hip-hop purists are usually snobby when it comes to people performing over backtrack vocals, but with these guys you can make an exception. They were putting on a show and pouring their hearts out. This is the difference between Rae Sremmurd in 2018 and Migos who graced the same stage in 2017. Rae Sremmurd are pretty good live performers. Actually, let me correct that—Swae Lee is a good live performer. While Sway Lee was losing his mind at the end of the show, Slim Jxmmi was just standing there, becoming an afterthought. I can see why people are calling for Sway Lee to go solo. The show would’ve been a lot more enjoyable if he was by himself.

Unfortunately, the show ended kind of abruptly. Perplexing Pegasus played while they were still interacting with fans so the show just kind of ended and that was it. An underwhelming finish.

Looking at it through the lens of an 18 to 25 year old today, this concert was “lit”. Rae Sremmurd makes great music. If we look at this show through the lens of someone who grew up in the Golden Era of hip-hop, and who was trained to value wordplay and great content, this show was still good. Even when Missy Elliott or Busta Rymes did a party record they still had to be able to rap, but it’s unfair to measure acts like Rae Sremmurd against that standard. Rae Sremmurd’s strength is their vocals and energy and they provided lots of it.

The jury is still out on whether or not they’re the Black Beatles or going to the Rock ‘N Roll Hall of Fame. They definitely have the numbers. They have multiple songs with over 100 million streams. But the legends are legends because they pioneered a new style or they did it better than everyone else. I can appreciate their music, but I didn’t see enough to be wowed. It was a good show, definitely better than others we’ve seen in recent years, and Sway Lee is more talented than a lot of artists today, but in the end we were left with a pretty good show, not a great one.