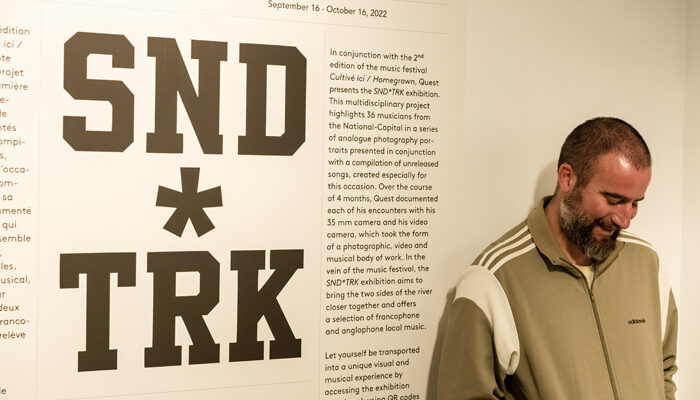 When you think about hip-hop producers in the capital region, you have to mention Quest. A pupil of XO producer and Gatineau native Da Heala he’s been churning out beats for the region’s top artists for almost 20 years. Over the past 12 years, he’s added both photography and videography to his arsenal, all while being an advocate for the Gatineau side of the scene.

Following the opening of Dreamland, Quest launched “Dreamland Sessions”, a series of 16-bar freestyles which help the featured artists gain exposure. To mark the 100th episode of this passion project, SND*TRK was released.

The project opened with an interactive exhibit where 25 portraits featuring local artists were presented at the Centre d’exposition L’Imaginer in Alymer, Quebec until October 16, 2022. Each portrait included a QR code that gave those in attendance an early listen to a song by that artist. Together, the songs made up the SND*TRK album containing songs from a combined 36 musicians who have contributed to the 600-plus productions Quest has worked on.  Just some of the names in this project are locally and internationally acclaimed artists Lia Kloud, D-Track, City Fidelia and Asuquomo. Although the exhibit is now closed, the full album has been released for fans to enjoy.

To open the album, the first track features a captivating yet understated announcement from Quest himself. He dedicates “SND*TRK” to the deceased Dip Black, a popular Ottawa rapper. Quest then tells the listener to relax and let him take you on a journey through the album. In the early 2000s DJs would plug their names into mixes, but Quest takes this personal aspect above and beyond. For anyone who was listening to music during that time, this detail is comforting. For a more recent reference, many radio shows do mixes featuring personal introductions from the host or DJ. Anyone who grew up listening to the radio would find this nostalgic as well. After a smooth transition into a jazzy beat, Apollo The Child hits us with a dynamic starting song. He was the perfect choice to open with. He spits with passion but is able to slow it down to create a catchy piece.

“Black Messiah” is undoubtedly one of the most influential and potent tracks on the album. It samples the iconic yet haunting song “The Inflated Tear” by Rahsaan Roland Kirk. This song is heavily integrated into the movie “Judas and the Black Messiah.” Which “Black Messiah” is clearly in ode to. Bobby Brugal was able to tackle this challenging beat, while also adding appealing vocals.

“Window” is an unexpected and memorable song. When it hits the listeners ears, it’s a never before heard sound. A menacing, simple beat welcomes Asuquomo’s grimey raps. His voice has a grit which gives an aggressive feel. This track is perfectly balanced with a repetitive beat, yet unique flow.  “Who’s that peeking through my window?” questions Asuquomo as the main bar of the song, setting the intimidating tone.

While the album is full of experimental-type songs, there remain many which have a wide appeal. “Confession” contains a modern and trendy beat. Lia Kloud enters the song with a nonchalant cadence. This contrasts the lyrics which are about ambition and struggle. “Moonlight” is another notable track on this album. Freddy Printz is a rapper who has a punchy, jazz-influenced sound. He demolishes the beat he raps on and is able to pull it all together with a non-stop flow.

Overall, this album distinctly shows experience from Quest and all the musicians on it. The sheer number of polished songs is impressive. Furthermore, the platter of different sounds offered up for the listener to pick and choose from is appealing to every music lover.