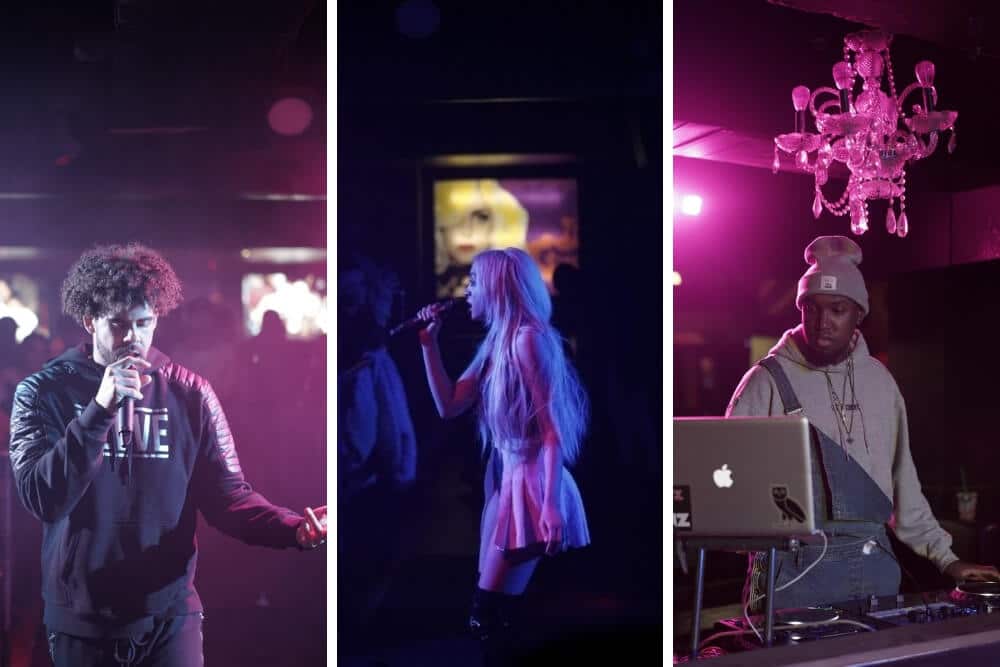 Toronto showed out on Good Friday night for another edition of Toronto’s Urban Music Showcase, Taste of the 6ix.

The monthly event, produced by XOXO and Night Night Entertainment, gives emerging artists a necessary platform to not only share their music but to network with other artists, industry professionals, social media influencers, as well as music producers and labels.

On Friday we didn’t just get a taste, but a full serving of R&B and hip-hop from some talented up and coming artists from around Toronto and other parts of the country.

The six artists who took the stage were Fame Holiday, Bebeboy, Nya, Chantelle C.W., Naquita Russell, and Hevve. Holding down hosting duties was Toronto YouTube sensation Rochelle Clarke. The popular event host, stand up comedian and actor recently launched her #UpWeGlow movement, inspiring her followers to “open themselves up to new experiences”. She even took some time to showcase her own talent, performing some brand new music for the hundreds in attendance.

The three other ladies showcasing their talent that night dropped some sultry and smooth R&B joints and drew the crowd in with their stage presence and unique vocal style. While the fellas blessed the audience at Orchid Nightclub with skilled lyricism coupled with infectious bravado and flavour. All individual artist performances created that vibe and energy we’ve come to expect in the 6ix.

Off the top, Nya opened the night and immediately took command of the room. Born and raised on the west end of Toronto, she attributes her style to her Eritrean roots. “My mom was really into community work and the creative side of our [Eritrean] community. Putting on cultural shows, singing and poetry. She always pushed me into that when I was a kid. I had no choice. My mom was running it. She gave me my stage presence and my confidence. From there I got into poetry and then poetry turned into me actually writing full songs and gaining the confidence to sing them now.”

Nya’s set was followed by Pickering, Ontario’s very own Naquita Russell. The South African born and raised singer has been on the local music scene for two years now and takes a business mindset approach to her work. “I look at things [from a business perspective]. Wherever my income is going to come from,  it’s gonna be from something I love doing. The lifestyle that I live I have to create a career out of my passion. A lot of people set their passion aside and then later in life there’s a lot of regrets. I feel like you really have to hone in on yourself and find your purpose. Everyone is responsible for finding what their purpose is. For me, God gave me a voice and I think it would be a disgrace if I never used it.”

With a goal to open for larger musical acts in the future, Naquita is also on a mission to bring more exposure to female artists from the 6ix. “I noticed that the city is very male-dominated with artists like Drake, the Weeknd and Tory Lanez. I feel like some strong female energy would be good for the city. A female artist that would open the lane for other female artists in the city as well.”

Chantelle C.W. is one of those young female artists on the rise. The 19-year-old Filipino-Jamaican singer from the east end of the 6ix showed on Friday that she already has a loyal following in the city and doesn’t look to slow down anytime soon. She credits her debut single Take Care as the launch pad for her career as an artist. “Take Care was the first song I ever wrote. It happened to be based on a relationship that ended up not going so well. I went through hundreds and hundreds of beats on YouTube or BeatStars. I found the perfect one and then we made the song. That how it all got started.”

Coming all the way from Ottawa, Hevve made sure the T.O. crowd knew his name before the end of the night. Dropping four tracks, including his hit single On It, Hevve says his confidence is at an all-time high and is ready for other big city markets outside of the nation’s captial. “The atmosphere, the crowd, the sound and the [Taste of the 6ix] organizers made me feel like an absolute star. There’s something special about this city. There’s an aura and an [unique] identity to it. For Quest and myself, its exciting and rewarding to see that our sound can blend so well with the already well-developed vibe of Toronto.” Hevve and his producer Quest remained in the 6ix over the Easter Long weekend to shoot his new video for the track “Hit ‘Em Up”.

Born in Toronto and raised in Brampton, Bebeboy brought some trap sounds that generated some of the best crowd response of the night. Inspired by fellow Toronto area artists Drake and PARTYNEXTDOOR, the Latin-Canadian artist had one of the most modern sounding and “radio ready” sounds of the night. Simply put, Bebeboy, along with producer Bounce Zaddy, can make hits. It’s no wonder he’s already been recognized by the likes of Complex. With his Taste of the 6ix performance in the books, it will be interesting see how he continues to elevate in 2019.

22-year-old Mississauga rapper Fame Holiday came through and continued to carry his momentum as a notable up and coming hip-hop act. Fame closed out the night in a big way. When asked about his original inspiration, he took us back to a trip to L.A. that changed things for him. “When I was 16 I had a song called Eyes On M featuring my cousin Romeo Wilson. We shot the video out in L.A. I met a lot of artists for the very first time. People like Chris Brown, Tank, [and others]. I was like wow, maybe I am made for this. I feel like moments like that and hearing feedback on certain things help me to keep pushing.”

Through the Taste of the 6ix, each artist continues to take ground in the local and national music scene. When asked what is the single most important piece of advice they would give to aspiring artists, each had this to say:

Fame: “If you really want it, be dedicated and take it seriously. Be willing to make sacrifices. Understand that nobody owes you anything. Your friends, you’re going to expect them to support you all the time, but it’s not always going to work out like that.  But keep pushing and it’s going to work out.”

Chantelle: “It’s so easy to compare yourself to other artists, especially if you’re starting out. You feel discouraged seeing followers, numbers, etc. It’s so easy to get caught up in that instead of realized everyone is on their own path and their own way of making music. There’s no competition. Especially in Toronto, its a win for the city”

Nya: “Just go for it!! Whatever it is. If you’ve started up something and haven’t taken that step. Go for it! When you go for it you’re going to realize Damn, I should’ve done this a long time ago.”

Naquita: “Be what’s true to you. There are a million sounds out there. Find the sound that sets you apart from everybody else. It’s so easy to be a dime a dozen. And artists sometimes don’t know themselves. Everything falls into place when you know yourself. Be consistent with what your lifestyle is and be truthful.”

The next edition of Taste of the 6ix Friday is set for Thursday, May 9, 2019 during Canadian Music Week. Artists can apply at tasteofthe6ixaus@gmail.com.

Check out Taste of the 6ix on Instagram and Facebook to stay up-to-date on the latest from Toronto’s newest artist showcase.