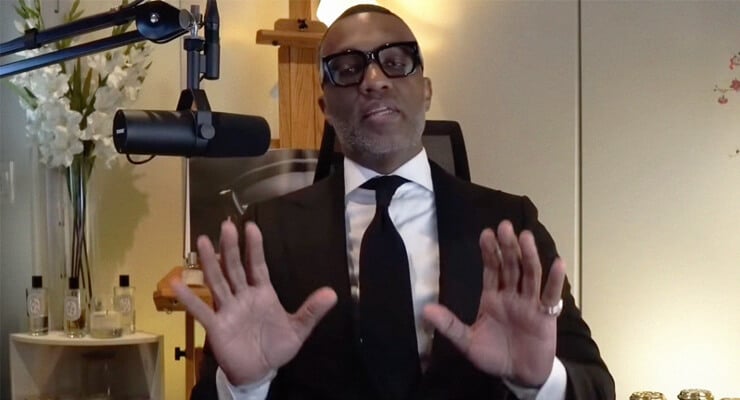 OPINION – THOUGH PROBLEMATIC, THERE’S NO NEED TO CANCEL KEVIN SAMUELS

A petition calling for his cancellation is circulating but according to Jhamesha Milord Ashford, though problematic, there’s no need to cancel Kevin Samuels.

Kevin Samuels is a self-appointed image consultant and lifestyle coach with over 1.08 million subscribers on YouTube. Nevertheless, over 16,200 people have signed an online petition asking to cancel Kevin Samuels.

Even though I can agree that cancel culture can be toxic at times, I want to ask our readers if people should really be taking relationship advice from a guy on the internet who has already been divorced twice. I don’t think we should cancel him, but can we really take this guy seriously?

Kevin Samuels is pretty much known for criticizing black women online. Although there is some truth to the things he says, his comments flirt with misogyny, especially towards Black women. Samuels has no background in marriage and relationship therapy, psychology, gender-related issues, or anything relevant to his platform. Despite that, he still feels entitled to his outdated opinion about what Black women need to do in order to “get and keep a man.”

In addition, Samuels’ thoughts on whether or not Black women should be allowed to wear bonnets outside the house are outrageous and have nothing to do with him. In all honesty, if I’m catching a flight in the early hours of the morning, you will for sure catch me at the airport with my bonnet on.

Also, according to Samuels, ‘High Value Men’ can cheat because cheating is in their nature. He says that men’s value and worth are defined by the amount of money they make. In contrast, he also promotes the idea that a woman’s value is defined by the world, along with her ability to get and keep a man. This notion teaches women to devalue themselves. Furthermore, Kevin Samuels adds that women are “assets” who become useless if they are unable to remain submissive to their men. His point being that women have to demean themselves or settle in order to find love.  I don’t know what world Kevin Samuels lives in but this does not sit right with me. I believe this way of thinking only sets us up for failure and leads to one-sided relationships. No woman that truly values herself wants to be seen as a “trophy wife”, who’s sole purpose is to make her husband look good.

In my opinion, healthy relationships are built on a foundation of mutual respect and not one sided control. Wanting to control your partner usually displays signs of insecurity. I feel like a lot of Kevin Samuel’s advice for men are hypocritical. There are too many double standards rooted in entitlement based on men’s net worth. According to his own rhetoric, I should believe that a man who only makes over 10K a month has nothing else to bring to the table? Personally, it is my belief that the qualities that provide “High-Value” to a man are rooted in his integrity, his well-developed character, a fear for God, his direction, his ability to love and care and, of course, his humility.

Overall, I get what he’s trying to teach us. Women need to be more realistic when it comes to their standards and bringing the same things to the table. The issue is his unnecessarily rude attitude towards the women he comes across. It seems like his rating standards are based on European beauty features which is why he believes that it’s okay to judge women based on their weight or appearance. His ideals are also rooted in white supremacy, something he refuses to talk about and says has nothing to do with his conversations. But he upholds this idea, where mixed-raced and non-Black women of all ages and circumstances are better romantic investments than black women.

In one of his now many viral videos, Samuels can be heard telling a Black woman, “You’re average at best”. He is also known for his famous quote, “Buy a dog, die alone”. When I heard that, my mind drifted towards the famous TikTok sound that goes “AND WHAT IF I WAS SUICIDAL ? WHAT IF THAT WAS MY LAST STRAW?” I mean… As the saying goes… “If you don’t have anything nice to say, don’t say anything at all”.

Again, in his YouTube episode titled “High Value Men Cheat”, Samuels calls out a female caller, saying she has no right to question this topic because she’s “built like a football player”. He also puts all the responsibility for functional marriages on the woman rather than sharing responsibility between men and women. And the blatant disrespect to single mothers is just hard to watch. The fact that a woman has a child with a man that she is no longer romantically involved with, does not undermine her worth nor does it result to her life being over. That is just ridiculous.

It appears that Kevin Samuels’ audience is predominantly made of hurt and angry men who would rather seek approval from others rather than work on themselves, as well as insecure women that have been feeding into his narrative. We’ve all heard the quote right? “Hurt people, hurt people”, which is the kind of vibe I’ve been getting from Kevin Samuels.

My stance remains. There’s no need to cancel Kevin Samuels. Let’s remember that his opinion isn’t factual. After all, he has put out some great controversial, shock value content. YouTube and social media have also been a main source of income for him and I don’t think that his revenue should to be taken away from him. However, because of his delivery, I can’t take him too seriously, nor do I plan on supporting his content in the near future.

Listen, this is pure entertainment. Again, I do not plan on taking relationship advice from a man who has been divorced twice and finds joy in disrespecting my sisters. I find this quite disturbing actually. I hope Samuels soon realizes that many of the things he says actually cause more harm than good. I highly encourage him to work on his approach and to extend his respect to all women. Not just the ones he happens to find attractive or fit his own biased ideals.