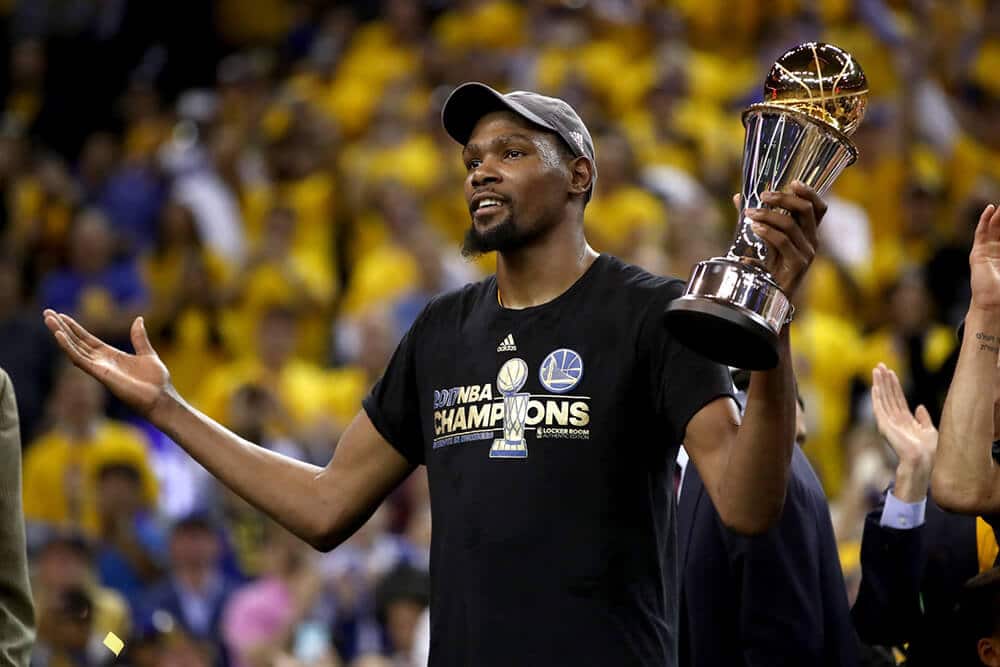 OPINION – THERE’S A LITTLE KEVIN DURANT IN ALL OF US

I hate the Golden State Warriors.

Even more, I hate Kevin Durant for joining them last year after almost beating them while being a member of the Oklahoma City Thunder during the 2016 NBA playoffs. Durant seems to have taken the phrase, “If you can’t beat’em, then join’em” literally and now stands as an NBA champion.

When Durant initially made the move it was followed by scathing articles and commentary from the press. Big names like Stephan A. Smith and others vocalized what the majority of the sports world were thinking, calling the free agent’s decision a “weak move” and “bad for the NBA”. Even at SHIFTER we questioned him as a leader and competitor.

Current NBA players and past alumni have collectively offered their own criticism of the move. And after winning the Larry O’Brian Trophy this past week and the NBA Finals MVP, Durant’s achievements have the perception of being “watered down” when compared to other past champions.

But I digress. What’s really being said here?

Based on the current NBA Collective Bargaining Agreement, Durant was an unrestricted free agent and could sign with any team. The Warriors happened to have enough money under their salary cap to afford Durant.

Okay, yes I know this is information that most of us already knew, but due to the polarizing nature of pro sports, I believe most of us are framing Durant’s actions unfairly.

Let’s look at a few points:

In high school I had a subscription for Sports Illustrated that I paid for myself. It was the greatest piece of literature I owned in my 17-year old mind. It made me want to become a writer, not just to talk about sports but to make an impact with my words; telling stories to change lives.

If I got a call from SI to organize their files, let alone be a featured writer, what do you think I would do? “No I think I’ll keep writing for these local papers and web magazines because I want to see them rise into something big in the future.”

If you were a web designer and got a call from Apple what would you do? How about getting a call from Nike to do a shoe design collaboration after seeing your graphic or clothing design portfolio?

I know you see my point here.

Professional sports and social media continues to create this biased denigration of the choices polarized figures make, when in reality we would do the same in our professions.

Working with the best writers, designers, creative and business minds, etc., will only make you better at your craft. So will working with companies that have the top resources and capital at their disposal.

Yes, my hate for the Warriors is real. Probably because I’m a closet Lebron fan. But I will retract my stance on KD because we can learn from his drive to succeed on setting goals on a high level and achieving them.