The 6ix has been on buzz lately with the Toronto Raptors winning the NBA Chip and bringing the Larry O’Brien Trophy back home to its Canadian roots. Three days after ‘bored man’ Kawhi and the boys closed out Game 6 of the NBA Finals against the Dubs, 2.5 million fans took to the streets of downtown Toronto to celebrate the official victory parade.

Fast forward five days later, this past weekend another Toronto team took to the field for the first time this season looking to keep the sports momentum going in the city. The Toronto Argos made their 2019 CFL season debut at home against cross-city rivals the Hamilton Ti-Cats. If you follow CFL Football, you know Argo/Ti-Cat games are heated because of the close proximity of the cities.

I was on location for the match at BMO field as the stage was set for the Toronto hype to continue. It wasn’t like the Argos hadn’t tasted recent success. The ‘Double Blue’ were CFL Champions in 2017, winning the 105th Grey Cup Game in Ottawa that year. That must have been some victory celebration because the Argos followed that season with a disappointing 4-14 record in 2018, inevitably missing the playoffs.

2019 is the season of redemption for the Boatmen (The Argos have something like 10 different nicknames) and there’s no better way to do so then to start off by beating your arch rival. But things didn’t go exactly as planned Saturday afternoon for the home team. 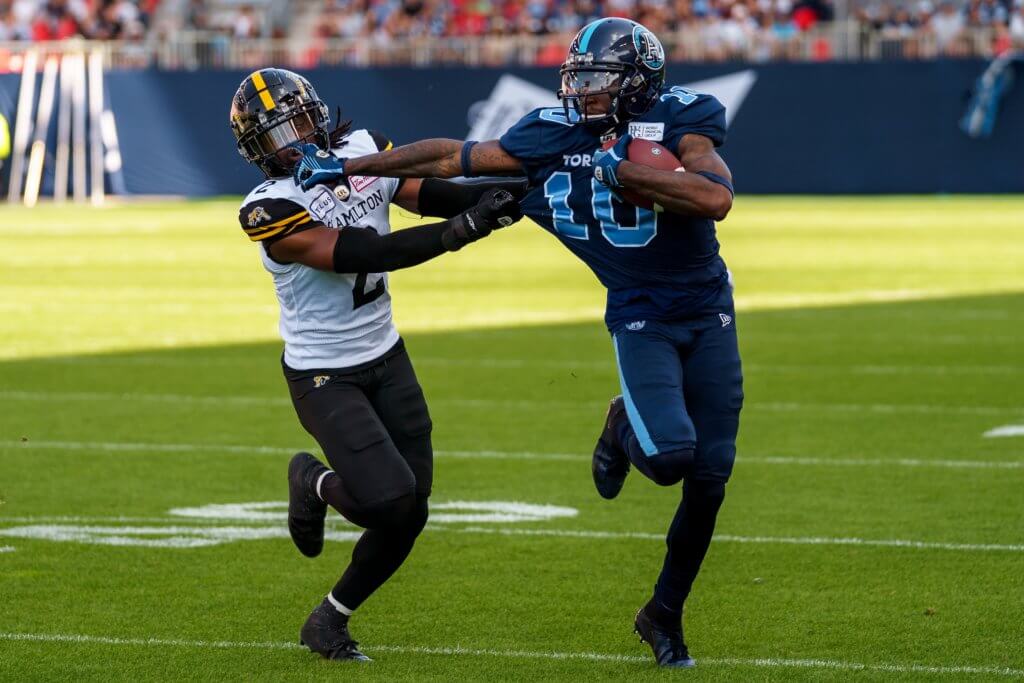 The Argos got thumped 64-14 by the Ti-Cats. It was an ugly affair for about half of the 16,734 fans in attendance. The other half, Hamilton fans, took out their phones every 5 minutes to record a big play. The onslaught started in the first quarter and continued straight through to the fourth when Hamilton defensive back (an Eastern All-Star with Ottawa in 2018) Rico Murray took an interception back to the house for six to end the game. The pick-six tied a Ti-Cats club record for margin of victory in a single season game.

It didn’t matter because I was one of only a handful of Toronto fans to stick around to see the final play. The majority left after Hamilton’s Brandon Banks took an Argos missed field goal attempt 113 yards for a TD early in the fourth quarter making the score 47-6.

All that being said, the main storyline wasn’t the score. I’d be hardpressed to believe no Agro player has ever been on the wrong side of a blowout loss in their amateur or pro football career. Even I know what it’s like to win a chip in football, only to experience the embarrassment of forfeiting a game the following season.

The Argos management team needs to continually achieve success on the field to match their major league cousins and consistently stay relevant in the crowded Toronto sports entertainment market.

The loss was tough, but the real loss was the inability to extend the Raptors championship momentum to the Argos season opener. That might be an unfair statement to make, but let me be clear: Toronto’s sports culture is something sacred. We Toronto fans are dedicated to our teams. So much so that the success of one of our teams leads us to start rooting for other city clubs. Not just fans but the players themselves get caught up in the excitement and energy when another home franchise is experiencing post-season success.

In 2015, several Toronto Maple Leafs players took in the Blue Jays first playoff game in 22 years at the Roger Centre and more recently the Raptors this year. Blue Jays all-star pitcher Marcus Stroman is a regular at Raptor games the past couple of seasons. The Argos themselves wore ‘WE THE NORTH’ patches on their jerseys for an exhibition game this year during the NBA playoffs in support of the Raps.

It would have been cool for MLSE to somehow have a few of the Raptors in attendance with the Larry O’Brien Trophy in hand hyping up the crowd. Maybe give away some free tickets to get the stadium filled with fans from other teams, at least for the first game of the season. I get that the logistics and planning to organize something like this is easier said than done, but connecting other Toronto fan bases with the Argos should be a priority for the team.

With the Raptors title, the Jays playoff runs in 2015 and 2016 and the Leafs resurgence under President Brendan Shanahan, the Argos management team needs to continually achieve success on the field to match their major league cousins and consistently stay relevant in the crowded Toronto sports market.