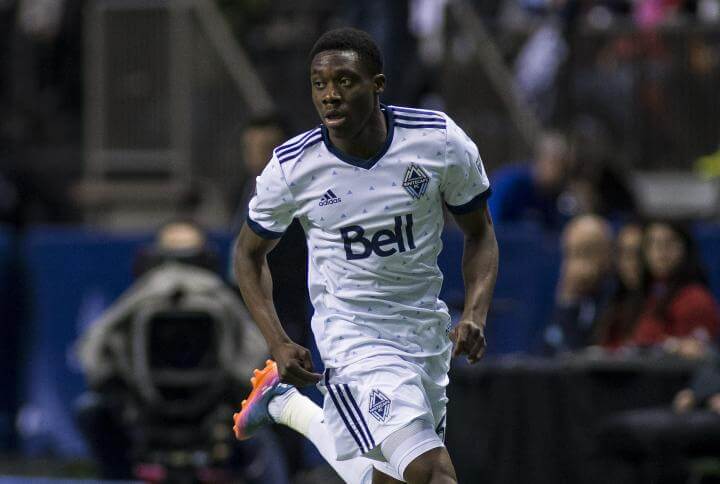 Canadian wonderkid, Alphonso Davies, has completed his dream move from Vancouver Whitecaps to FC Bayern Munch for an MLS record $22 million dollars (18.75 million euros). This deal is a significant one when you consider MLS is the league where top European players go to end their careers, earning one final payday and  experiencing the North American lifestyle.

Many legends have made the move, from David Beckham and Kaka to Steven Gerrard and Frank Lampard, and most recently Zlatan Ibrahimović. The MLS has somewhat built its reputation off the backs of such star players.

This move may signal a changing of the tide when it comes to North American football. The young Whitecaps star has been highly rated and linked with moves to Europe for some time now and, with the move finally taking place, we’ll be taking a look at three reasons why this is such a huge deal for soccer in Canada.

1. A chance for a Canadian to shine on the world stage

Alphonso Davies is only 17 years old. To get a move to one of the top clubs in soccer at his age is astounding. He’ll arrive at Bayern Munich mid-season as he won’t make the move until the end of the current MLS season. This could play into the youngster’s hands as he could be given a chance on the first team rather than being sent straight out on loan.

Either way, even if the club does choose to send him out on loan in the January transfer window, he’ll have the best opportunities for development and has virtually assured himself of a career in Europe, catastrophe aside. The chance to see a Canadian wear the famous red and white shirt is a proud moment for soccer fans in Canada.

2. Signals a change in opportunity for young players coming from Canada

Usually, young players in North America aren’t given the chance to make a move directly to such a high-level soccer team. Freddy Adu was a highly rated American playing at Real Salt Lake at 17 and managed a move to Benfica. It didn’t quite work out for him in the way he would have hoped in Europe, however he wasn’t afforded the opportunity Alphonso Davies has been given. This deal and the number of clubs interested in Davies seems to suggest that top European clubs are paying more attention to North America and potential future stars, meaning moving to Europe young and playing for three C level teams before earning your move to a top team may be a thing of the past.

3. Suggests a progress in Canadian soccer

Soccer is the most played sport among children in Canada and, as I’ve already suggested, Davies staying in Canada until 17 years old suggests that progress is being made at a grassroots level. The de Guzman brothers both moved to Europe before they signed a professional contract as it was the only way for them to achieve their goal of becoming professionals.

Today in Canada we have the likes of Toronto FC, Vancouver Whitecaps, Montreal Impact and Ottawa Fury FC, and soon the Canadian Premier League. This means young players in Canada can play professionally and develop their career at home, gaining first team and even national team experience before moving to Europe. The progress that has been made in this area is exciting for Canadian soccer and shows that the sport is heading in the right direction.

In 20 years time, there’s every reason to believe there will be a whole host of professional clubs, top coaches, and excellent facilities, meaning young players will have the chance to stay in Canada for their development until even later into their careers before moving to Europe.

Canadian soccer fans must be patient

Patience is needed when it comes to the progress of soccer development in a country in which the sport isn’t well established at a professional level. It’s going to take time. There’s a reason why Brazil, Argentina, France, England, Italy and Spain produce star player after star player that perform on the world stage. Soccer has been established in those countries for some time. The facilities, the coaches, the clubs, the finances, all play a major factor.

That being said, when you look at the landscape of Canadian soccer today and where it has come from over the recent years, there’s every reason to be optimistic regarding the future. Players such as the de Guzman Brothers, Atiba Hutchinson, and Paul Stalteri made it possible for Alphonso Davies to potentially be remembered as the one who really shattered the glass ceiling opening the door for future Canadians to play for the best clubs, win the best trophies, and change the landscape of the game in Canada.