If you’re just getting word of this, here’s the breakdown: Duke Basketball scheduled exhibition games with Canadian Universities, Ryerson, Univ. of Toronto and McGill, with games set to play in Mississauga and Montreal respectively.

Whoever planned the tour with Duke obviously sold them on the desire for Canadian fans eager to see Barrett who helped Canada win Gold at the U19 Basketball World Championships in 2017. Also, Duke Basketball fans are like Dallas Cowboy fans: you can find them in every corner of North America.

I’ve never been a part of that continental fan base. My hate for Duke Basketball and the Cameron Crazies runs deep. From the Christian Laettner days to present, I’ve always rooted against them. But after watching them play for the first time live this week, I can honestly say there’s a very small chance that might change.

Barrett is as complete of a player there is at this level, and Williamson is just simply a B-E-A-S-T! R.J. can pretty much do whatever he wants on the floor and Zion pretty much dunks on anyone and everyone on the floor. I’m glad I had the opportunity to see both up close on the court and post-game in the locker room, because it may not come around again. Both are expected to declare for the 2019 NBA draft after the season is over. Both are that good right now. 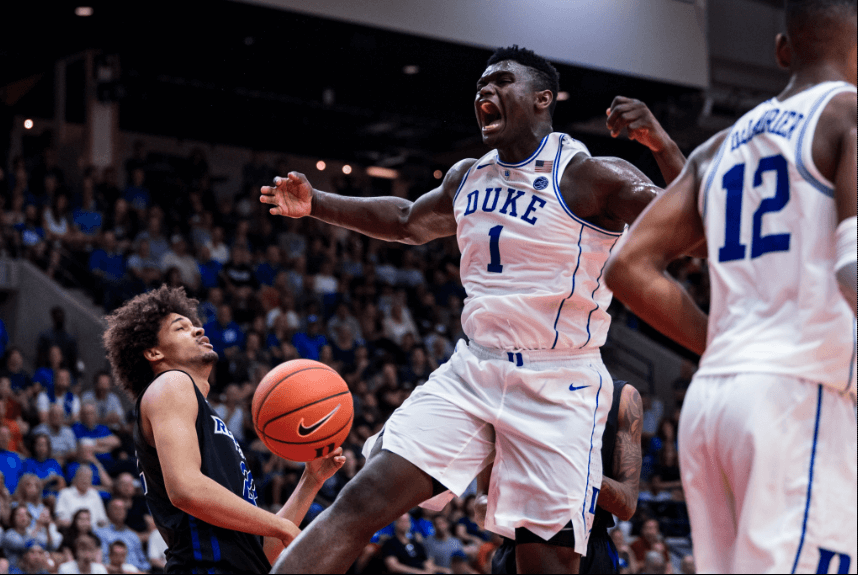 Freshman Zion Williamson showed the physical gifts that made him a YouTube sensation in High school (Photo credit: Duke Basketball)

I’ve seen R.J. play live twice now and I really like his all-around game. However, this was the first time I got a good look at Zion aside from his YouTube highlight mix-tapes, and all I can say is this dude is the real deal. There’s no one as physically gifted as he is right now. Pound for pound, he’s a match up nightmare for any team in the College ball. He already has an NBA ready body, scaling as the 2nd heaviest NBA player right now!

The Legendary Duke Head Coach Mike Krzyzewski (Coach K), who was out there on the court coaching an exhibition game like it was the Final Four, seemed to agree with my sentiments after the game calling Zion “Unique” and a “Different type of athlete”.

This will be a different type of Duke Basketball team for me and many other Canadian basketball fans as we now have a vested interest in seeing the Blue Devils do well in the upcoming season. Not only that but the Duke Basketball Canada Tour has opened the possibly of more big-name College Teams coming to the Great White North to showcase Canadian talent they may have on their roster. Events like this directly impact the Hoops movement in Canada, a movement which has been on a rapid upswing for the last decade and doesn’t look to slow down anytime soon.