“If people say your dreams are crazy…If they laugh at what they think you can do…good….stay that way. Because what non-believers fail to understand is that calling a dream crazy is not an insult. It’s a compliment.” – Colin Kaepernick in the new Nike ad.

Nike leaked their much anticipated ad featuring Colin Kaepernick online this week and it wasn’t what most of us expected.

The ad, scheduled to air during NFL’s opening weekend, features Kaepernick who plays the part of storyteller and motivational speaker, detailing inspirational stories of triumph from the likes of Serena Williams (from Compton, CA to the #1 tennis player in the world) Lebron James (Akron, OH basketball phenom to building a school in Akron for at risk kids), and Shaquem Griffin (one handed NFL draftee to starting LB in the NFL).

As great as those stories are, they don’t compare to the other nameless athletes in the ad who display a mix of inspirational and emotional tales of overcoming all odds, turning their dreams into realities. If you’ve yet to watch the ad, take a look below.

Believe in something. Even if it means sacrificing everything. #JustDoIt pic.twitter.com/x5TnU7Z51i

The video ad is a far cry from the assumed intent of the print ad that was released a few days earlier. 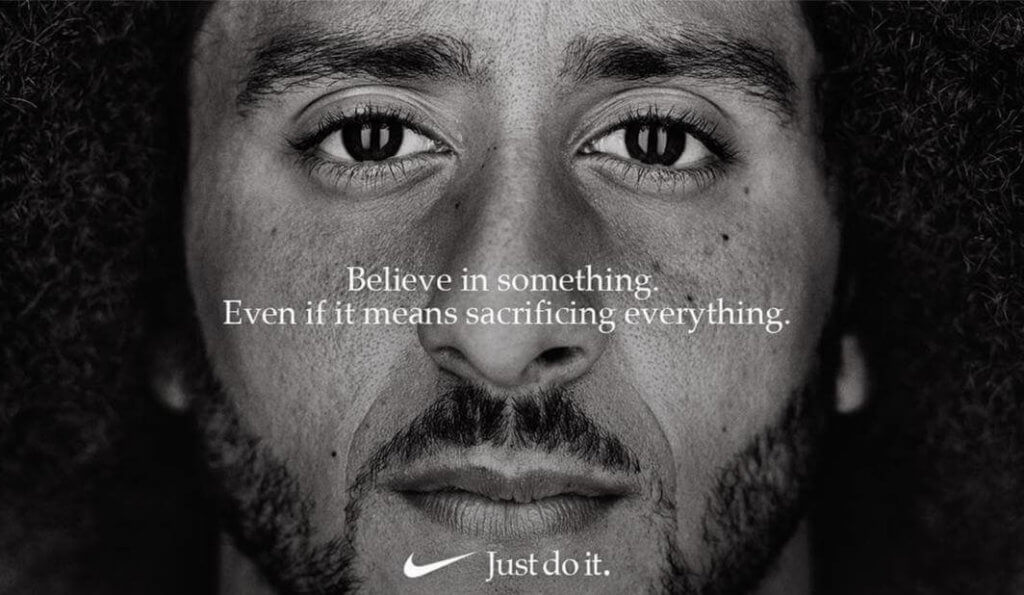 As expected, this ad drew mixed reactions, just as the “Take a Knee” debate has for the last two years. Some applauding Nike for taking such a bold stance representing a controversial figure like Kaepernick, while others showing their displeasure by burning Nike apparel and posting it online in what to me comes across as a strange irony of sorts.

The problem with the print ad is it came with a lot of political assumptions as to what Nike was communicating. True to form, Nike has historically been “Childish Gambino-like” with their print ads-presenting imagery, heavy with symbolism and deeper meaning. When the ad was released, those who oppose the “Take a Knee” protests took the bait and immediately vilified Nike for allegedly supporting anti-American viewpoints (look up comments by President Trump and The National Association of Police Organizations).

In the same way the print ad had Kaepernick supporters praising Nike for being a corporate brand that not only isn’t afraid to bring issues of police brutality and social injustices to the forefront of popular culture discussions, but is bold enough to back and support someone who seemingly spearheaded the recent movement.

While the latter of those two viewpoints is closer to the truth than the former, Nike’s video ad filled in the gaps where the print ad left off.

It’s about the pursuit of dreams in the face of immeasurable setbacks and opposition. This is Nike’s expertise. Drafting up ideas and making them into ads that pull raw emotion from its audience. It’s what they do. It’s the business they are in. There’s nothing new here from Nike’s perspective. Are they indirectly backing Kaepernick’s stance on specific social/political issues by making him the face of this campaign? Absolutely. Is it the only message they are trying to sent through the ad? Absolutely not.

In the ad Nike is willing to address that gender equality, body image, and physical disabilities should never derail an attempt to pursue and accomplish your dreams, no matter how lofty it may seem to others. But just as the original narrative of Kaep’s protest is being misdirected into something else, Nike’s detractors are doing the same with this ad.

What these same detractors don’t realize is Colin Kaepernick has a dream and it doesn’t involve disrespecting the American anthem or flag. His dream is about healing a broken country by being a voice for the voiceless in the black community. Yes there are issues within the black community that need attention and resolution, but there are also real systemic issues that some Americans still don’t want to admit exist.

They also don’t realize that Nike is a global brand and the “Take a Knee” debate is truly an American one. What does that mean? I believe Kaepernick is seen as a hero worldwide, which is why Nike would never support the opposite side of the spectrum. For every person burning their Nike apparel in the USA, they will gain 20 or more new customers globally. The disdain for right-wing American politics around the world is so strong that it’s possible to believe that Nike saw an opportunity to exploit it.

“Global confidence in US leadership has fallen to a new low, and the country now ranks below China in worldwide approval ratings, according to a new Gallup poll. The survey of opinion in 134 countries showed a record collapse in approval for the US role in the world, from 48% under Obama to 30% after one year of Donald Trump – the lowest level Gallup has recorded since beginning its global leadership poll over a decade ago.” (via the Guardian.com)

Nike has never backed off from supporting sports personalities after controversy (see Kobe Bryant and Tiger Woods). Supporting Kaepernick and being a powerful brand storyteller at the same time is well within the wheelhouse of Nike’s strategic business moves. This isn’t an anti-law enforcement or and anti-American ad. It’s an ad about the resilience of the human spirit, and what we as the human race can accomplish if we’re ready to sacrifice everything for it. Whether you believe that narrative or not, Nike will continue to grow in their global market share by believing in someone who strives to achieve something bigger than a American pro football career, and overall bigger than himself.