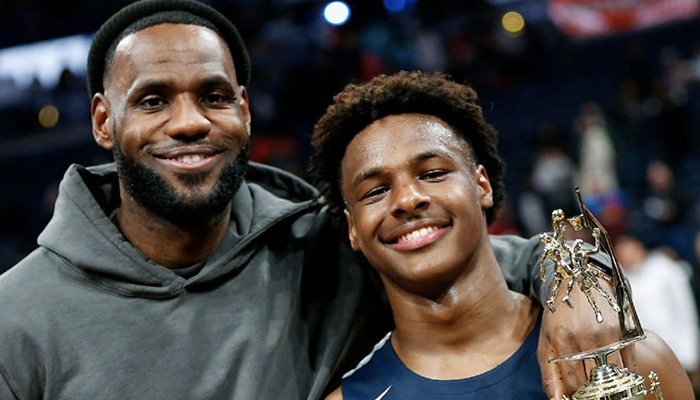 Sports writer Sheldon Barrocks breaks down why the new Nike deal with Bronny James makes sense––business-wise and for the culture.

I’m here to set the record straight about Bronny’s recent endorsement deal with Nike. It seems there’s still some misunderstanding of how strategic business works in today’s social enterprise market. So let me break it down.

Like most sports fans I’m always intrigued to see if the next generation of talent can dominate like their fathers did. In cases like MJ’s sons, the talent gene probably skipped a generation. While on the other hand Kobe and Steph eclipsed their father’s professional basketball achievements by a factor of 10x. Either way, the early comparisons and expectations are an unfortunate reality for the offspring of professional athletes. And it’s why Bronny James, the first born son of Lebron James, has been a polarizing figure not just in sports but also in pop culture since he was a freshman in high school.

Fast forward 4 years. Bronny, short for Lebron James Jr., is now a senior guard on the Sierra Canyon H.S. varsity basketball squad and just signed a NIL (Name, Image and Likeness) deal with Nike. He wasn’t alone. 4 other student athletes were welcomed into the Nike Basketball family: Caitlin Clark, Haley Jones, DJ Wagner and Juju Watkins. But let’s all admit we only care about Bronny and how he secured the bag without as much as sniffing the college admissions process.

The terms of the deal weren’t disclosed, but the lack of factual details has never stopped social media from engaging in highly speculative conversations. Various opinions online can be summed up into one simpleton sounding statement, “He got the deal because of his dad” (I can almost hear keyboard warriors whine as they type that). Unfortunately this viewpoint is the result of a generation raised on emojis and abbreviations like ‘LOL’. They bypass research and comfort themselves by claiming achievements were based on luck or last name privilege.

I’ll agree that any son (or daughter) of basketball royalty would make us put our head on a swivel and grab our attention for a hot minute. But keeping our attention? They would need to do something special. Bronny is “like that” and seems to relish being in the spotlight, even though initially choosing to wear the number ‘0’ to separate himself from his father’s legacy. But when your government name is Lebron James Jr., there’s no chance of living your life under the radar. The basketball community seems to have taken notice. Despite being more heavily scrutinized than any other kid his age, ESPN has Bronny listed as a 4-star basketball prospect and currently ranked as the 34th best H.S. player in America.

His ranking isn’t what caught Nike’s attention. Bronny has almost 7 million followers on Instagram. The only social media platform his parents allow him to have publically. He gets millions of views on his YouTube highlights posted by fan sites and ESPN has already broadcasted a few of his games on national TV. On top of that he’s been on the cover of Sports Illustrated…twice!

Nike, like most successful brands, is in the business of making money. That means shifting marketing dollars from TV ads to social media, where Nike’s target market spends most of their time.

But Nike isn’t the first athletic brand to throw money at a top teenage athlete/social influencer before his senior season. At the age of 17, Bronny’s former Junior High AAU teammate Mikey Williams signed a multi-year  NIL deal a year ago with Puma. The current 5-star prospect became the first American high schooler to sign with a global footwear company. And for good reason. Williams has more than 5 million followers combined on Instagram, TikTok and Twitter. His online persona was a perfect fit for Puma’s strategy of marketing to basketball’s next generation. A strategy Nike will eventually mimic with Bronny.

I’ll be honest, Lebron was and will continue to be an important part in his son’s success. But it’s Bronny who deserves his flowers for putting the work in on and off the court, building his personal brand. So the next time you’re tempted to assume Bronny’s success is a by-product of Lebron’s, ask yourself if brothers Marcus and Jeffrey Jordan are names that mean anything to you.