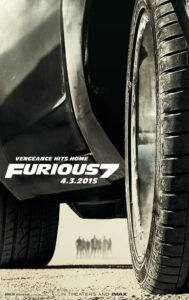 Furious 7 has taken the box office hostage this weekend as it made $143.6 million dollars on its opening weekend. Shifters, you can trust me when I tell you that it totally deserved it.

Following Fast & Furious 6, Dominic Toretto (Vin Diesel) has to gather up his crew one more time (Paul Walker, Tyrese Gibson, Ludacris and Michelle Rodriguez) to take down Deckard Shaw (played by Jason Statham); a man looking for revenge against the crew that took down his brother in the previous film. Fans might complain that the plot gets a bit convoluted here and there as James Wan, who took over the director’s seat, attempts to make multiple story lines coexist, making us forget what’s truly at stake sometimes. But somehow that becomes totally irrelevant. From the action-packed first scene to the emotional ending, Furious 7 doesn’t slow down. It remains fast-paced and never loses focus on what it tries to deliver.

What the audience needs to understand about Furious 7 is that it’s meant to be fun and totally unrealistic. Forget about any laws of physics because the studio doesn’t care about them and neither should you. In this universe, people drive through multiple buildings and walk away from the most violent explosions without a scratch. Some characters can easily take multiple punches in the face from Dwayne “The Rock” Johnson without being fazed. The filmmakers are totally aware that none of it makes sense and they manage to make us accept it anyway. What also makes Furious 7 such an entertaining movie is their ability to remind us that regardless of the action and the cheesy one-liners, the franchise is still about family.

“No matter where you are, whether it’s a quarter mile away or half way across the world,
you’ll always be with me and you will always be my brother.” – Dominic Toretto

Of course, it would be impossible to not talk about the late Paul Walker. The actor who portrays Brian O’Conner tragically passed away in 2013, having completed only half of his scenes. The studio delayed production and were fortunate enough to have Walker’s brothers Caleb and Cody step in and finish the movie on his behalf. Regardless, it’s impossible to watch this movie without a heavy heart. Especially in the end sequence, where Paul Walker and his now iconic character are given a tribute they both deserve. Get your tissues ready…