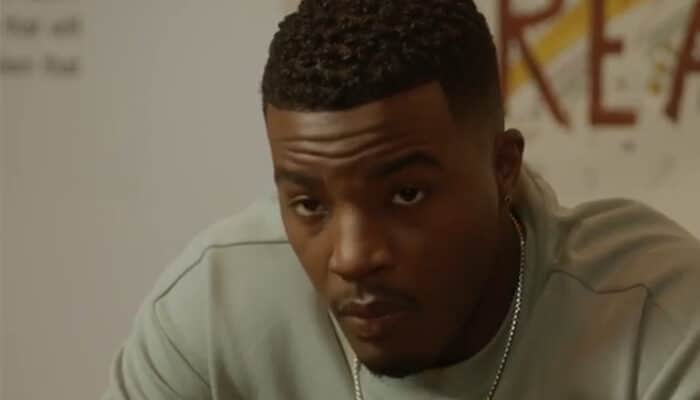 Layla and JP, Spencer and Grace, Liv and Billy —this episode features some important parent-child conversations. Kevin Bourne breaks it down in his All American season 4 episode 12 recap.

The episode opens with Spencer, Coop, Preach and Patience talking about the pending investigation against Coop in the murder of Monique.

Spencer also continues to learn from his unlikely “zentor” JJ as he attempts a new approach to life and football.

Meanwhile, Billy meets the preferred candidate for the permanent principal position. This leads to a father-daughter talk with Liv, one of the most beautiful moments of the season so far. The tables are turned as Liv encourages her father, who has grown to love being a principal even more than football, to hold pursue his dream.

Preach is finally arrested for Monique’s murder, and is forced to tell his daughter, Amina, the truth. Laura comes to the rescue but, unfortunately, Preach’s legal problems cast a dark cloud over Billy’s chances of landing the permanent principal job.

Love is in the air as things continue to unfold for Layla and Jordan’s slow as molasses relationship. What brings them together is her father, JP, stepping back from his label to spend time with his new love interest, Erin. JP encourages her to slow down and experience love instead of focusing on building her empire like he did which inspires her to pick up the phone.

The episode comes full circle as Grace continues to doubt Billy’s ability to be the permanent principal. After a conversation with the wise beyond his years Spencer she discovers the real reason for her not supporting Billy is her fear of becoming an empty-nester as the men in her life move on without her.

Finally, with Preach released from prison, it’s all rainbows and sunshine until we find out the case against Coop isn’t as closed as we thought.