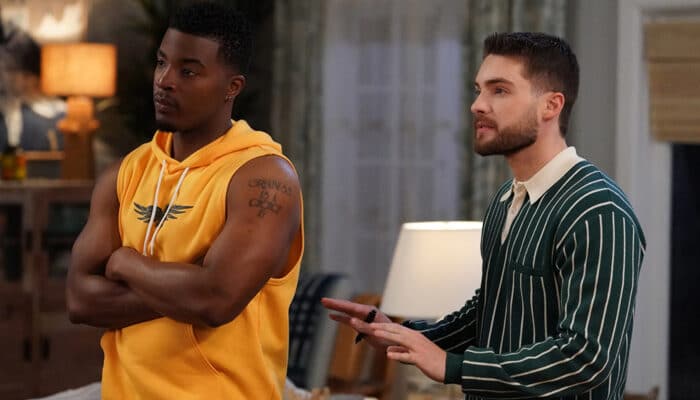 There’s friction between Spencer and Asher as their schools get ready to go head-to-head. Meanwhile, Spelivia continue to drift apart. Here’s our All American season 4 episode 17 recap.

After Spencer is moved from special teams to receiver and the focus of Golden Angeles’ offence, Wade tries to get all “buddy buddy” with Spencer. After Spencer calls Wade “the best quarterback in the country” it causes some tension with Jordan.

Speaking of tension, this episode also saw some rare friction between Spencer and Asher. As Coastal California gets ready to play Golden Angeles at homecoming, Coach Montez asks Asher to create a scouting report on Spencer and Golden Angeles. Asher feels conflicted in selling out his friends, but after a conversation with Coach Baker he decides to do his job. After Spencer discovers private details from his conversations with Asher end up in his scouting report it causes strain in their relationship.

Adding to Spencer’s stress is his relationship with Liv. The past few episodes have hinted at trouble in paradise and this episode continues the story. Liv and Spencer go on a picnic date realizing they don’t have much to talk about anymore. Later in the episode, Liv has a lot to talk about with her co-workers as Spencer looks on realizing they’ve drifted apart.

Where Spelivia’s relationship appears to be in trouble, things are blossoming between Jordan and Layla. The two head to San Diego to visit Carrie to get some closure for Layla. Carrie let’s Layla know she saved her life, giving her the closure she needed. Meanwhile Layla helps Jordan to rediscover his love of football by playing a pickup game in the park. If the scenes from next episode are any indication, this is going to be a big storyline next week when Simone asking questions.

Finally, Patience gets flowers from Sabine making Coop is jealous. At the same time, Coop’s relationship Skye is also growing. The two agree to be friends and set ground rules for dating other people. It’s clear things aren’t over between Coop and Patience, but we’ll have to see.