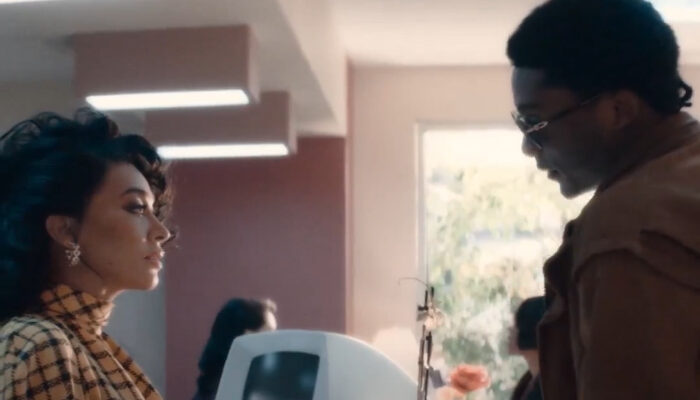 Terry is living the legit life, while Meech is trying to forge new alliances to grow his empire. Here’s our BMF season 2 episode 1 review.

The season two premiere of Starz’s BMF is exactly what you would expect from a good season premiere. It does a good job of continuing where the season one finale left off, while raising the stakes and at times leaving you on the edge of your seat. Important secrets are revealed while Meech’s ambitions propel him and the crew to the next level.

The episode asks a great question that summarizes the episode well―”Who’s the hunter and who’s the prey?”

The episode opens in St. Louis, Missouri in 2005 as a now older Terry hosts family dinner at his home for his crew. The good vibes are interrupted abruptly when SWAT raids Terry’s home, led by a now much older Detective Bryant.

We’re then transported even further back to late 1980’s Las Vegas where Meech is picking up product. There’s a Toronto reference in there as we learn that Caribana, as well as Freaknik and the NBA All-Star game are the places for people in the drug business to flex.

Meanwhile, Terry is trying to live the legit life by getting his car service business off the ground. Their parents are still struggling to make ends meet which appears to be taking a told on their parents. It’s also affecting Nicole who is starting to act up by mouthing off to her mom who gives her a nice little clap in her face.

Terry is angry when he finds out his mom orchestrated his girlfriend leaving with their son in season one to get him to leave the drug business. The truth leaves him not knowing who he can trust.

In the streets, the beef between 12th Street and the 50 Boyz has escalated as Meech has a plan to being them together under a global empire named BMF. The cops are still trying to solve the murders of Kato and Lamar as they rebound from the murder of Detective Lopez.

Bryant meets his new partner Detective, much to his disapproval. After a ride around and a chase of some 50 Boyz members it turns out they may have more in common than they think. There’s a scene where we see Detective Bryant at home with his son, showing a softer side and humanizing the character.

At the high school basketball game, Terry spots Markaisha (Lala Anthony) who he was introduced to in season one as Boom’s wife and he’s instantly head over heals. Unfortunately, things get a bit tense as Meech still isn’t talking to him over stepping away from the drug game.

Meanwhile, Meech is still busy in the streets. He meets with a new seller named K-9, an associate of Big L who may compromise his new partnership. Meech is bent on trying to make himself invaluable to K-9 in order to solidify the partnership. When K-9 finally agrees, Meech tries to convince Terry give up his car business dream to come back to the business, but Terry still won’t budge.

The episode has a major plot twist as we find out a character from season one wasn’t, in fact, dead, but I won’t spoil that for you. We also learn that one of Meech’s closest allies is now a police informant working with Detective Bryant setting up a betrayal from someone he’s grown to love.

Overall, from the writing and acting to the plot twists, this was an season premiere done properly.

BMF is available every Friday at 12am EST on Starz.