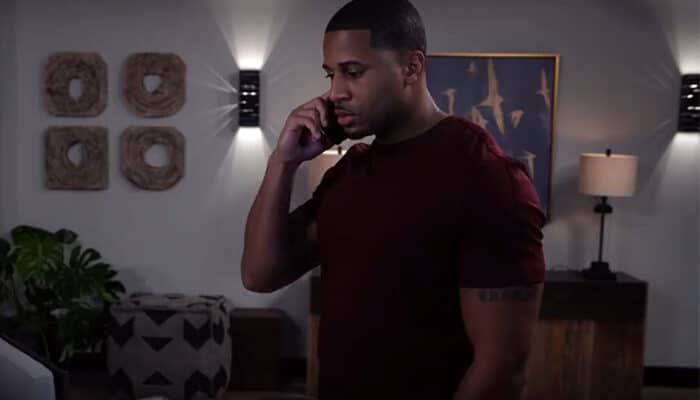 Gary and Karen continue to obsess over Andi and Zac. Meanwhile, we learn there may be more to Bayo than we think. Here’s our Tyler Perry’s Sistas Season 4 Episode 20 recap.

Building off the story from last episode, Zac gets an unexpected call from the Senator’s wife who gave him the stock tip that made him rich. She wants to talk to him setting up the story for next week. Fatima comes over and can see that something is on his mind, but Zac doesn’t feel he can confide in her just yet.

Danni and Logan arrive at the double date first, but she’s clearly uncomfortable. She’s comparing him to Preston, asking him random questions like, “Do you like cows?” After Logan asks questions about her life, she lets him know she has “dating PTSD”.

Sabrina and Bayo walk in and the double date begins, but after recognizing Bayo from somewhere, Logan dips. Is Bayo a part of the trafficking ring as fans have suspected? Bayo starts checking out Danni, obsessing over how beautiful she is. He then says he wants to meet all of her friends. Major red flags. Claire Huxtable would call him a “bushwacker”. Fortunately, Sabrina seems to see right through it.

After the date, Logan comes over to Danni’s apartment and asks her questions about Sabrina and encourages her to tell Sabrina to get a lawyer (yup, Bayo’s a bushwacker).

Meanwhile, Maurice and Que are getting settled into quasi-domestic life as Que offers to run a bath for Maurice and warm up his food, breaking down Maurice’s defenses even more.

For about the third episode in a row, Gary and Aaron are still in his office as he continues to obsess over Andi and Robin. Aaron advises him to see other women. Gary gets super foul replying, ”Didn’t your wife shoot herself?”

Aaron dips, refusing to be a pushover (if only he did that with Karen).

The Andi and Gary saga continues as she calls Karen to give her the latest details, only to find out Karen was camped outside Zac’s house. Andi is trying to figure out what’s going on and thinks Gary might know about her and Robin. Finally, Gary comes over and Andi asks him about his behaviour. Gary tells her everything. The office across the street. The telescope. Everything. He refuses to leave after she kicks him out so she leaves and goes back to her apartment.

Karen then visits Zac to profess her love for him…again. The once independent woman has reached unprecedented levels of sad. She’s reached Gary levels of obsessed. She’s basically Gary without the telescope. You don’t know whether to be angry at her or to feel sorry for her.

Fatima hears the commotion and is about to come down for Fatima vs. Karen III so make sure to watch next week’s episode.

Before we go, shoutout to whoever chose the music this episode. You a deserve a raise. The soundtrack was fire tonight.