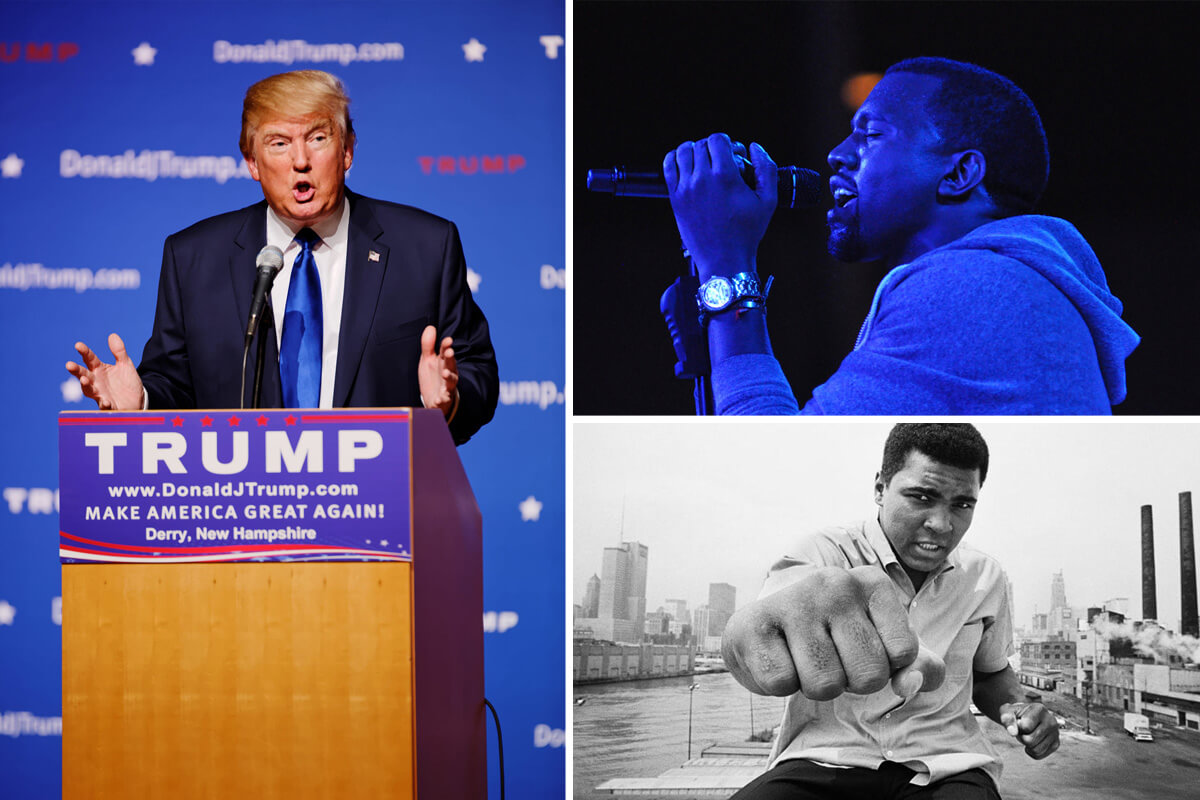 WHAT ALI, TRUMP AND KANYE HAVE IN COMMON

A couple of months ago the SHIFTER team got into a protracted debate about our perception of certain cultural  influencers. The usual suspects came up in the discussion- Justin Bieber, Donald Trump, Kanye West and civil rights activist Reverend Al Sharpton.

The debate centered around this notion that the image these cultural influencers project in public may not necessarily be who they truly are, but rather a carefully crafted image for the consumption of the public in order to advance their cause and brand. I was of the opinion that these individuals by nature seek attention and aren’t smart enough to create a persona for the sake of influence. I even went as far as to suggest that Al Sharpton is a self-seeking narcissist and could care less about the condition of Black people in the United States. I know it was harsh, but that was the opinion I held based on what I saw and read in various media outlets.

A couple of weeks later our team was invited to attend the Black History Month Gala in Ottawa. Honorees included British-born supermodel Naomi Campbell and Reverend Al Sharpton. I was shocked at how diametrically different Sharpton was from the persona that he projects on the air waves. He was none of the things that I had accused him of but rather the exact opposite. He was self-effacing, humble and incredibly patient with the hundreds of people that were clamouring for his attention.

I left that evening thinking that we truly don’t know who these cultural influencers are. They’re all playing a character on the stage of life and we’re the audience. Much of our judgments and opinions aren’t of real people but characters. Seldom do we get the opportunity to meet cultural influencers behind closed doors with their guards down. Rather, we get to interface with personas that are created by the media, their publicists or the influencers themselves.

So this begs the question, have we all been duped to think we actually know who these celebrities are? Is Kanye West as crazy as he seems? Is Donald Trump a buffoon who will say anything? Is Al Sharpton a media hound? Was Muhammad Ali really that loud, almost verging on egotistical? Or have they all purposely created these images to gain more attention in order to grow their influence?

I would argue the latter is true. They’re incredibly smart people who have a keen understanding that attention is the new currency. The reason Donald Trump is able to capture the hearts and minds of Americans has nothing to do with his ability but the persona that he carefully created and cultivated, “The Donald”.  The crazy hair, the outlandish statements are all part and parcel of garnering attention in the ever saturated media landscape. Donald Trump, through his persona, has remained relevant over three decades to the point that he’s able to leverage that currency to vie for the most powerful seat in the world.

“…attention is the new currency.”

In the same manner, Reverend Al Sharpton has used his theatrical style and inflammatory rhetoric to make himself one of the most recognized Black voices in the United States. Al Sharpton purposely created a caricature who played into the stereotype of white media- an over the top personality that speaks in hyperbole, while wearing jogging suits, with a medallion around his neck, with processed hair. He used his persona to become the singular voice for Black Americans.

Then we have the self-proclaimed deity that is Kanye West. He has been described as a narcissist and egomaniac, suffering from a god-complex. He’s often seen as delusional and out of his mind. When we gaze at Kanye through the pop culture lens we have no choice but to conclude that Kanye is mad, but what if the opposite is true, that Kanye has purposely created an alter ego that continues to flame the fire of media attention? The antics are just a way to keep the cameras and eyeballs firmly fixated on all things Kanye. His rants on social media are just a way of making sure the media continues to tell his story rather than theirs. West, Trump and Sharpton have used public personas to get in front of the media in order to gain attention and grow their influence. Our perception of all these influencers are stories that they have fed the media for our consumption. They understand that controversial personalities sell.

Lastly, as we mourn the passing of the greatest boxer of all time, who can forget the larger than life persona of Muhammad Ali? He could have written the playbook on using public persona to build a brand and play to the media before there was ever a workshop on personal branding. He was Black, loud, poetic, self-confident, and he stood up for what he believed in. Even today influencers, whether in sports and media, still draw from Ali’s playbook. What made Ali a genius is how he made what should’ve been an unlikable persona into one that people would love throughout his whole career and life. Other people, like Floyd Mayweather and Kanye West, portray a similar character, but have yet to be liked by the public.

So what can we learn from these influencers? Well, first of all we actually don’t know these individuals and we’re not that different from them. All of us at some point have created a persona or alter ego to grow our influence. Our social media accounts are littered with images and captions that have been crafted and edited to present a different version of ourselves. Does this make us horrible people? I don’t think so; it’s just the nature of social media. The lesson here is don’t pass any judgements unless you’ve met the person. Media lies, sometimes by design. This is why it’s important for us to always assume the best about people no matter how they’re portrayed in the media.

Secondly, there’s much we can learn from them when it comes to creating a story or personality that gets attention. In today’s marketplace, playing it safe won’t garner you or your brand attention. Being a little edgy is actually good for your business.

The right persona can be your personal launching pad to grow your influence and expand your brand. There are many artists who have created personas that are bigger and bolder versions of themselves. A classic example of this is Prince. In real life he was this quiet, diminutive and unassuming person, but on stage he would morph into a rock god. He used his persona to differentiate himself in the music industry and grow his influence.

Now I’ll end with a word of caution. What we learn from some celebrities is that creating a public persona that isn’t consistent with the real you may be effective, but it comes with lots of pressure- the pressure to “perform”, the pressure to lose your true self. Ultimately, I believe there’s a better way and that’s just to be yourself. Having congruency between your public life and private life is the key to true success and happiness. It’s the greatest marketing strategy. However, there’s still much we can learn from these celebrities when it comes to growing your influence. Storytelling, owning your story, having a strategy on how you want to present yourself in the public eye, and standing out from your peers are essential for expanding your influence.