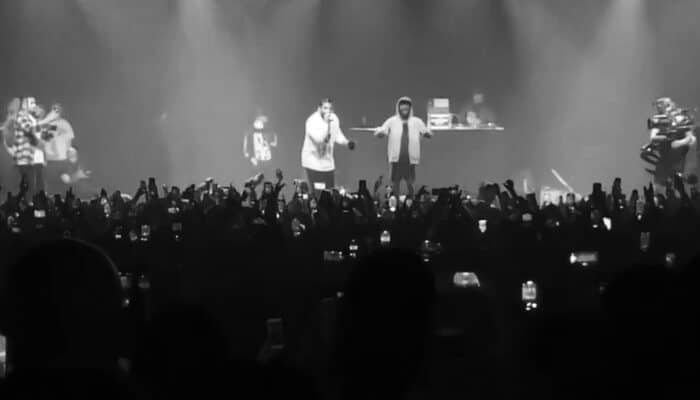 With the All Canadian North Stars show, Drake plays the role of middle child, bringing together generations of Toronto hip-hop fans.

After a two-year break due to the COVID-19 pandemic, OVO Fest returned with a bang. There have been some key moments that had fans and social media buzzing so far, including Chris Brown bringing Tory Lanez on stage during his performance. But the event that still has everyone buzzing is the All Canadian North Stars show on Thursday night.

The lineup featured some Canadian hip-hop and R&B greats, including Kardinal Offishall, Choclair, Jully Black, Saukrates, Maestro Fresh Wes, Glenn Lewis, Rascalz, K-OS, Keshia Chante, and In Essence. For a generation of Toronto hip-hop and R&B heads that were often forgotten, the night felt like more of a family reunion than just a concert.

Despite my babyface, I come from the generation that grew up on Rap Essentials and Groove Essentials compilation CDs and Mic Check magazine (my sister still has the Jada Pinkett issue on display in her basement), hurried home to watch Master T host Rap City after school, then watched him host DaMix (or X-Tendamix if you’re a real OG) on Saturdays. We were the pre-Flow 93.5 and pre-BET generation who had to position the antennas on our stereos just right to get WBLK in Buffalo so we could get the latest music.

I often say to myself that people who have been following Toronto hip-hop since the late eighties, early to mid 90’s have a greater context for the magnitude of what Drake has accomplished as an artist and what he did the other night.

Today, a lot has changed. Due to the impact of Drake, Toronto has learned to fall in love with itself. The city actually wants to hear music from its own artists. Turn on Flow 98.7 and you’ll hear music from artists across the GTA―Scarborough, Mississauga, Jane and Finch, Rexdale and more.

But back in the late 80’s and early to mid 90’s, being a fan of Toronto hip-hop almost felt like you were in some secret society that no one else knew about. There was a culture and a scene; you could feel it. No, I wasn’t a journalist yet. I wasn’t a promoter or DJ. I didn’t hang out at Play De Record. I was just a fan; my sister made sure of it. I still remember the days in high school when I’d tell my friends that a Toronto artist had dropped a new album; the blank stares I’d get in return. I assumed everyone loved local hip-hop as much as I did. Nope, not so.

Finally, Toronto has a sound

One of the knocks on this generation in hip-hop is that we don’t honour the legends. In the U.S., platforms like Drink Champs have been created to give legends their flowers, but here in Canada, those platforms don’t exist. This is why the All Canadian North Stars show was so important; it’s one of the rare times when our Canadian legends were given their flowers.

…like J. Cole in the U.S., Drake is the middle child in Canadian/Toronto hip-hop. He’s the bridge between generations.

What has made matters worse is the “Finally, Toronto has a sound” narrative which has gained steam in recent years, even among journalists. While I was living in Ottawa, I once had a conversation with a 20-something producer who repeated the same thing. “Finally, Toronto has a sound”. The fact that these words were on the lips of a young producer in Ottawa, far-removed from the culture and history of Toronto, says this has become some sort of talking point or narrative that people are mindlessly repeating without context. My response was, “When did Toronto not have a sound?”

If East Coast hip-hop is hip-hop in its purest form, the West Coast is hip-hop with a funk twist, and the South is hip-hop with country twist, then the North is hip-hop with a Caribbean twist. Caribbean is to us what country is to the south and funk is to the west. It’s the thread that ties Michie Mee, the Dream Warriors, Snow, Kardinal Offishall, Drake and Pvrtynextdoor together. It influenced most of the artists who performed on Thursday night if you listened to the way they rapped and talked. It was the sound of first generation Canadians who were equally influenced by the food, stories, music and talk of back home and the hip-hop culture we were consuming at school or in the neighbourhood.

That’s why the “Finally, Toronto has a sound” thing always seemed so disrespectful to me. It’s like our generation was that relative that the whole family was embarrassed about. They live up in the attic but no one acknowledges they’re there.

Unlike our cousins in the UK who embraced their own sound and gave rise to Drill and Grime music, what the “Finally, Toronto has a sound” narrative indicates is that we didn’t start to really accept our sound until others (meaning the U.S.) did. Good old Canada; always looking for validation from others.

The All Canadian North Stars show reminded me of a time when I felt like Toronto artists were making music for me and not to impress a mainstream American audience. Like the UK today, the music was created by us, for us. As Jully Black and Kardinal Offishall spoke in Patois and yelled “Pull up!” and “Run chune!” as they commanded their performances the other night, I felt a sense of pride that this is us; this is the culture that defined my youth and finally its being given the sense of place it deserves.

The moments that made Toronto

Although the All Canadian North Stars show was a moment, it was also the culmination of many moments.

The day after the show, I was having lunch with a 19 year-old, up and coming hip-hop producer who had never heard of Maestro Fresh Wes and “Let Your Backbone Slide”. It was shocking yet heartbreaking. You should’ve seen his face when I told him Dr. Dre and Snoop’s “Gin Juice” only hit #2 on Billboard because of “Informer” which spent seven weeks at #1. That was a moment in Toronto music.

Then Friday night, I was walking through the financial district, past the TD towers with a young member of my team who grew up in Montreal. I told him about the feeling I got when I first saw the “Let’s Ride” music video with Choclair and Kardinal Offishall riding past those same buildings in a Hummer, and Choclair riding down that same street in a yellow suit holding onto the back of a motorcycle. That was a moment. There was the feeling that something had changed.

There were other moments. The first time I heard Sticky Fingaz on Ghetto Concept’s “Heavy Metal”, or Kurupt on Choclair’s “Skunk”, or Busta Rhymes on Kardinal Offishall’s “Ol’ Time Killin’ Remix”. Today, we’ve grown used to American artists featuring on songs with Drake, Nav, and Tory Lanez, but those first few American features on Canadian songs were moments.

Although new audiences can head over to Spotify or take in a show to get the music, how do you convey the context and feeling that certain moments gave you?

I often say to myself that people who have been following Toronto hip-hop since the late eighties and early to mid 90’s have a greater context for the magnitude of what Drake has accomplished as an artist and what he did the other night. Growing up in a time when Canadian artists struggled to make it south of the border, if you had told us that one day the biggest artist in the world would one day be from Toronto, I don’t think any of us would’ve believed it. You mean our Toronto? Dan-e-o, “Dear Hip-hop” Toronto? Nah.

Fortunately, like J. Cole in the U.S., Drake is the middle child in Canadian/Toronto hip-hop. He’s the bridge between generations. Toronto is a city that has tremendous pride in where it is and where it’s going, but hasn’t always had a real sense of pride in where it’s been. Hopefully that’s about to change.

Drake is known for identifying when an artist is about to blow up and giving them an alley-oop. They call it the Drake Effect. Perhaps the greatest impact of the Drake Effect won’t be careers catapulted to superstardom, but generations coming together and Toronto learning what Drake has known for years―that Toronto always had a sound, and a beautiful sound it is.