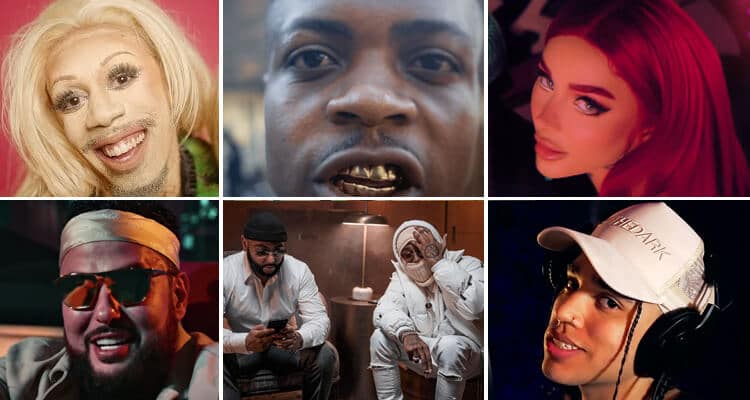 Check out the videos below in order of release date, then help us crown the top video in the country from July.

Now, last month you voted and crowned “Paranoia” by Sammy Keys as your Video of the Month.

Who will win for August?

Dax has been on a tare lately with the Eminem remixes. In July, he went in a direction nobody had anticipated. With the “Free Britney Spears” movement gathering steam, he dropped a remix of her 2003 dance-pop track “Toxic”.

The “White Chicks” inspired video shows a white and blonde Dax talking with his “girlfriends” and wearing some interesting outfits. Dax should be applauded for taking a risk and doing something most rappers wouldn’t do.

This is just a visualizer video, but it opens with behind the scenes clip of the late Mac Miller. The rest of the video features dvsn, Ty Dolla $ign, and Mac Miller cooking in the studio. It’s a good reminder of how much he’s missed.

The video opens with Unimerce and Yung Tory chatting online until he wants to meet her in-person. She suggests astral travel and soon enough the two are cuddling and vibing together. Great video concept from Michaela Lallouz.

One of the biggest songs to come out of Canada recently was NorthSideBenji and DJ Charlie B’s “30,000 ft”. On the song, Benji celebrates his success in the game while remembering where he came from, but because of his success he still has to be strategic in how he moves in the streets.

The single also came with some visuals directed by David Del Rosario and Greg Villarico, edited by Zac Facts, and executive producer by DJ Charlie B. True to the song’s title, the video shows the pair flying in a private jet before we see them enjoying some fine dining with the homies. He also takes some time to pay respects to his late friend and collaborator, Houdini, wearing a pendant of the rapper in the video.

This is a very cool video. It has lot of energy with fast cars and a lot of camera movement. There are also a lot of blue hues. Good video from Yungcudii, Suigeneris, and merdixf.

This video is intense. It features a hostage situation, a fire, and sexy girl camming. It’s literally a movie with great direction from Cartel Madras and Jashan Makan.

Vancouver-based R&B and hip-hop artist, Makadi is back with a new single called Raspberry Lemonade, accompanied by an Official Music Film. According to SHIFTER’s Kadiatu Barrie, the song and video are about letting people know that it is okay to feel vulnerable. The video, shot in Vancouver wuth 16-millimetre film, has a grainy, vintage look and depicts People of Colour and members of the LGBTQ+ community in loving relationships.

We’ll get to the video, but we need to talk about the song. EverythingOShauN really shows off his versatility on this track. On previous releases, he’s shown off his bars and even given us a little soul. On “WOJ” he shows he can give us a vibe. The symbolism is also on point―”I know the game like I’m Woj”. Fire.

When it comes to the Marcus Letts directed video (or “film”), there’s some good storytelling and effects. There’s also good acting and comedy from EverythingOShauN and the supporting cast, which includes Omega Mighty who also appears on our roundup. This is a video you’ll want to watch a few times; it’s that good.

In July, R&B singer Amaal dropped her new single “Honey”, a celebration of womanhood and a new chapter of freedom in her life.

SHIFTER’s Latoya Elle wrote a full piece on the single and video writing, “In the futuristic music video, the Somali Canadian singer-songwriter struts through an empty dungeon and lays on an examination table. As geometric LED lights scan her body, she discharges her alter ego, Milly. Directed by Montréal native film director Dan LeMoyne, Amaal graces the screen with poise, seduction and confidence to a caliber that has yet been seen by her.”

Click here Latoya’s for the full write up on Amaal’s “Honey”.

“Sweet Dream” is the first of two videos on our roundup from Alessia Cara. This one is very fun and over the top, featuring a restless Cara who can’t seem to sleep. We then we enter her dreamscape and the “over the top-ness” goes to another level. The concept is very unique and creative and shows more of Cara’s personality. Between her acting and the wardrobe, this video just makes you happy.

Although, this is a freestyle video, it features some cool shots of Toronto.

The video opens with a shot of Dom Vallie on one of Toronto’s “new-ish” subway trains. We then see him outside the station with Eglinton West in the background. The shot eventually switches to him on the Eglinton West station subway platform before the shots switch again to him in the studio, then in Yonge-Dundas Square.

The freestyle itself is dope and shows off Dom Vallie’s versatility. He’s able to do so many styles, even rock, but here he shows that he still knows how to spit.

In July, XO/Roc Nation artist, Belly, dropped a brand new music video for “Better Believe” featuring fellow label mate, The Weeknd, and Young Thug. The single is a follow up to his previous singles “IYKYK”, “Money On The Table” featuring Benny The Butcher, and Zero Love featuring Moneybagg Yo and a lead up to the release of his upcoming album See You Next Wednesday.

Directed by Christian Breslauer, the video is very cinematic with dark themes. In the video, we see a suit-and-tie wearing The Weeknd commanding a space ship before it switching to him driving a sports car with a beautiful Black woman by his side. He then hands it off to Belly who brings some bars, including a jab at fake rappers, and Young Thug.

The video features some cool effects, including a closing shot of the city on fire.

Usually, we only include one video if an artist has dropped more than one, but this one was too good to not be on the list.

In this video, Alessia Cara pulls an Eddie Murphy and plays all of the characters in the story. Her acting is very good and really conveys emotion despite the fact that it’s a comedy.

Overall, the story is very easy to follow and Cara really shows off her acting and comedic talents.

The MRDAMIANSINGH directed video for Omega Mighty’s “Whine Masta” finds her out in the country where she discovers a sign for a “Private Ranch Pawty”. The island vibes continue as we get a choreographed dance sequence and a party with her girls in a barn. We even get a cameo from her sister Haviah Mighty. Dope.

Everything about this is hard, from the track to the video. It opens with Swagger Rite listing off his resume of the videos he’s been featured in as a dancer before we see him in the hood with the homies. Again, this is an artist who has a diverse sound. He can give us everything from Reggae vibes to thoughtful songs about life in the streets. But it’s nice to see him take it back to the streets. With his flow and the production, this brings us back to “Drop Top” Swagger Rite and we’re here for it.

Tory Lanez has been experiencing even more success as a self-managed, independent artist as of late, and that success continues with “Grah Tah Tah” featuring Kodak Black.

The video opens with him hanging from a helicopter before we see a dramatization of him in the classroom with his old teacher who said he’d never amount to anything.

The overall quality of this video, from the shots and effects to the editing, is on point. Kodak Black also did his thing. The two compliment each other very well, both sonically and on camera. With both having had some legal trouble in recent years, this is a big flex to those who didn’t believe in them.

The video opens with Duvy pulling up to Centennial Grocery and Convenience in Markham in a white Rolls Royce with a red top. We find out the guys we think are his homies are really haters. Later that day, he deals with them as the story plays out. We also get some shots of Duvy in Southside Jane and Finch with his crew. Good storytelling from director 88everything.