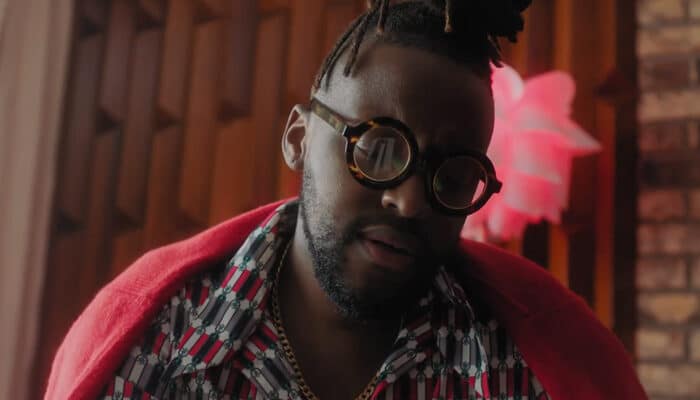 Known for his R&B Avante-Garde sound, Makadi opens up about past mistakes to his viewers by creating a powerful story with captivating visuals of someone in a relationship making a mistake, apologizing for it and still not getting back with the person.

“Amends” is a vulnerable and honest song, that gives listeners an insight into the complexities of what it’s like making a mistake and then trying to mend the relationship.

Directed by Max Brey, the film starred R&B singer Trs and Amber Bayani, who were also featured on the song.

The music video shows a couple who were once in a relationship, but after getting caught cheating, the guy is now trying to make amends for the wrong he did. The music film, creatively shows how nuanced relationships can be.

In the video, a friend came to visit her best friend after hearing that she had been cheated on. The best friends soon come to realize that they have feelings for one another.

Makadi began writing “Amends” a few years back, but never completed it. During the pandemic, Makadi was inspired to look into some of his older projects that had not been completed.

“A lot of personal and artistic growth happened. People were forced to reflect on what really matters and for me having music was so important,” said Makadi. “I realized that I have art as an outlet and that’s what led me to dive into old music to see what I can revisit and release.

This song is all about acknowledging making a mistake, “it’s me also apologizing for that even though things are more complicated,” he said

Makadi talked about how complex relationships and emotions can be, as it is not always just black and white, “I think we need to embrace that instead of shying away from it, allow yourself to feel upset, angered, betrayed and then heal … whatever God has planned is what’s going to happen,” said Makadi.

The pandemic influenced him to become more vulnerable as he said that “the stakes were too high.”

“Before when writing it I wasn’t vulnerable, but now coming back to it I was more vulnerable and so I was able to deliver the song,” said Makadi.

His lyrics reflect a man who was caught cheating but is trying to apologize and make amends. However, the film shows that apologizing and trying to make amends, does not mean that it will end with you and that person getting back together.

“I really want to make amends,
I swear that this is not pretend
This feeling won’t go away,
I thought of you yesterday ”

“Relationships are complicated and love varies for everyone. Making amends is not always easy and sometimes that means you may not get the ending you are hoping for, but the one you need,” said Makadi.

The moral of the story is that “things don’t always go as planned and just because you make an apology doesn’t mean it’s going to be accepted. But it also doesn’t mean that you shouldn’t have made that apology,” explained Makadi.

When asked what advice he had for new artists, Makadi responded, “your biggest asset is your vulnerability and I think the way to strengthen that is by wearing your heart on your sleeve more and more and leveraging your experiences. Over time you start to care less of what people might think and then you start to mature as an artist but also as a person.”

Amends, along with his previous single Raspberry Lemonade are expected to be on his upcoming EP called BRGNDY, which will be dropping in May.

Currently, Makadi is on a California tour with Sofar Sounds.

“Expect a little bit of heartbreak, love, and more,” said Makadi, when asked what the EP was going to be about.

“For this EP, I gave myself permission to make [something] and be raw because I owed it to myself to flex the true talent that God gave me,” said Makadi when talking about his next project.

Listen to Amends, out now on all streaming platforms, and watch the Music Film on Youtube. Stay tuned and follow @Makadiofficial for more music, beautiful artistic visuals, and an EP you do not want to miss out hearing on.