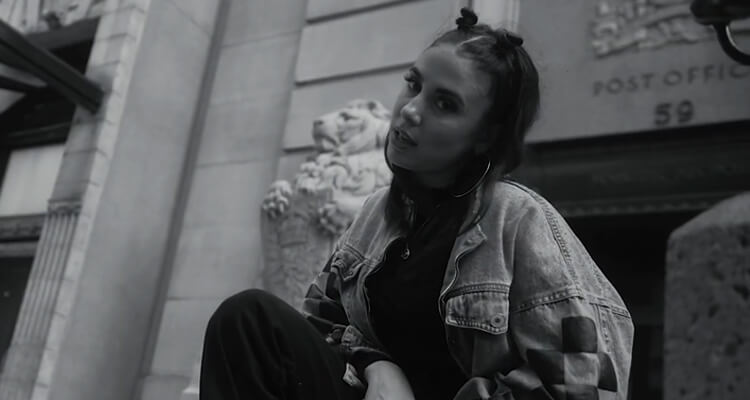 Ottawa R&B artist and dancer, Queenyy is back with “Distance”, the latest single from her 2020 EP of the same name. The project and single tell the story of the ups and downs of long distance relationships, including jealousy and distrust.

“‘Distance’ paints a picture of how jealousy can be contagious in a relationship”, Queenyy told SHIFTER. “I’m the type of person that if I say I’m your girl, I really mean that there’s no one else in my life – ‘When I said I felt it, I meant it.’ But if you still don’t believe that I’m being true, then I start to think, ‘What is he doing?’ Something as simple as a kiss emoji on someone’s IG photo can ruin an entire day with back and forth arguing when in reality is means nothing at all. Without trust in a relationship, especially long distance, it just doesn’t work. You gotta keep your head up!”

The 613Tino produced track oozes 90’s vibes, channelling the sound made famous by groups like TLC, as does the video, directed by Just Jay. Similar to her previous music video for “Replace Him”, it revisits the same black and white aesthetic with timeless 90’s choreography performed by Queenyy and long-time Ottawa popper, Armel Mzalina.

“I came up with the concept of the video when I finally met Armel in person. We both performed at the Fighting Fire With Fire show. And the vision just played in my head. Black and white 90’s vibes. Both of us walking down the street separately. Me singing, him dancing, and we meet at the end and dance together. As it’s about a long distance relationship, obviously us running into each other is just a dream, which is why I wake up on the park bench at the end of the video. I like to express how I feel through my music and movement and that’s exactly what the video showcases.”

Fans won’t have to wait much longer for more material from the Ottawa native as she promises a “movement visual” for “Broken English”, the final song on her EP, very soon.

“Distance” is available on all major streaming platforms. To check out the music video click the image in the header.