DeMar DeRozan finally broke his silence a week after the Toronto Raptors broke the internet by trading him to the San Antonio Spurs in exchange for all-star guard Kawhi Leonard.

He sat down with ESPN’s Chris Hayes in an extended interview to basically put into words the shade he’d been throwing at Raptors GM Masai Ujiri via social media over the past week.

By all accounts, this was DeRozan’s official venting session and most would say he’s rightfully due for one. After nine years with the franchise, DeRozan led the team to the playoffs the last five seasons, making it as far as the conference finals in the 2015/2016 season.

But for some reason Ujiri had seen enough after DeRozan and the Raptors were swept in the second round in the NBA playoffs for the second straight year by Lebron and the Cavs. After firing eventual NBA Coach of the Year, Dwane Casey, Ujiri then pulled the trigger on the DeRozan-Kawhi trade.

Raptor fans seem to be split in response to the trade with some calling it the worst move in team history, while others are relishing the opportunity to acquire Kawhi, who’s arguably a top five player in the league, even if it might be just for one year.

But everyone and their mother wanted to hear from DeMar who undoubtedly was the focal point in the trade for several reasons.

Here are my five takeaways from the DeMar DeRozan interview:

1. DeRozan’s hurt is real. DeMar didn’t mince words when speaking to Hayes in the 21 minute interview. He was very candid about being hurt and caught off guard by the trade as multiple sources reported when it took place. Earlier this year DeRozan publicly shared details about a mental health struggle he’d been dealing with for some time. He became the NBA poster boy for bringing much needed attention to the issue, encouraging others like Kevin Love to come out and share their struggles. I’m sure Ujiri and the Raptors were fully aware of this, but the handling of the situation as described by DeRozan suggests there could be an ethical issue within the organization.

2. DeRozan’s sacrifice can’t be overlooked. In 2016, DeRozan opted out of the last year of his contract making him an unrestricted free agent. Though he could have signed anywhere, including in his hometown L.A., he quickly re-signed with Toronto, showing his commitment to continue building a championship team in the 6ix. He also took less money to give the Raptors flexibility to keep other key players. DeRozan easily wanted to make this point clear in his interview with Hayes. “When I was drafted to the Raptors, they had this stigma on them: Every guy leaves, nobody wants to be here, superstars, nobody wants to play in Canada. From Day 1, my whole mindset and approach to the game, being in Toronto, was I wanted to change that whole narrative to that whole organization. That’s why I work my butt off like I did. That’s why I push, that’s why I repped so hard to get that stigma off it,” DeMar stated. 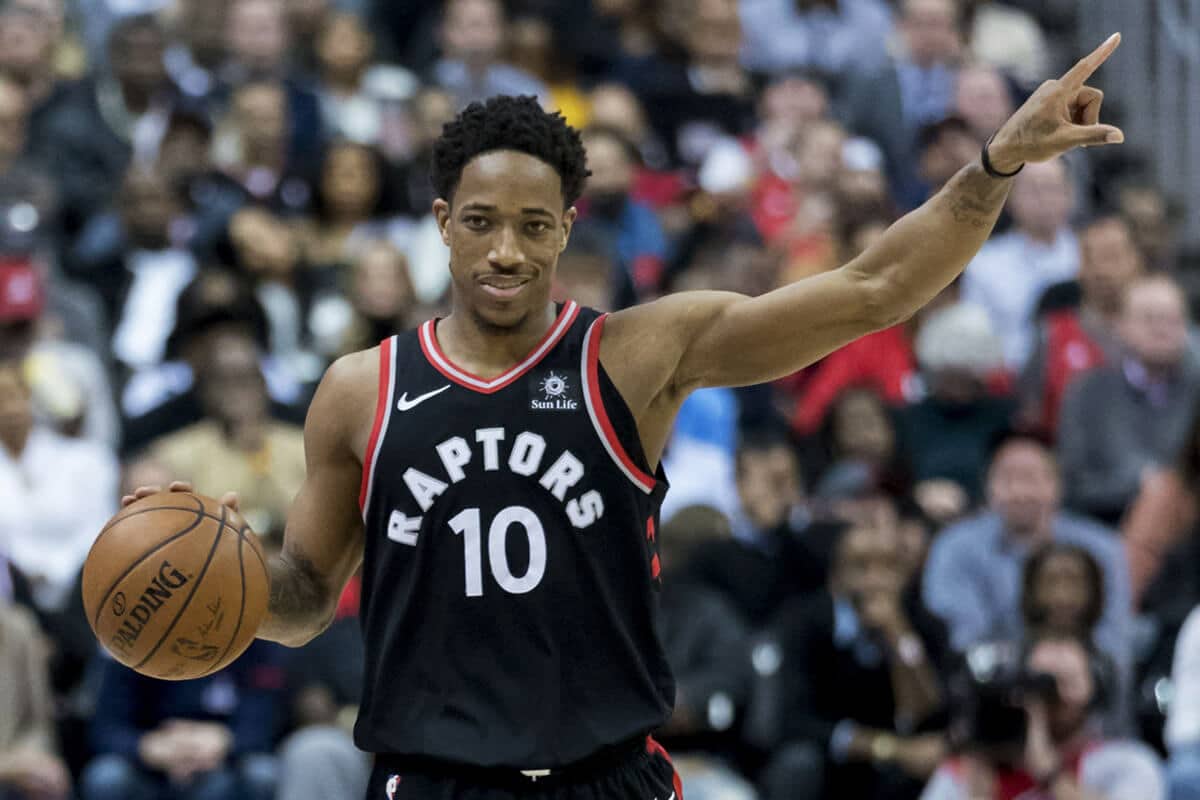 3. There had to be more unrest within the Raptors organization. During the interview, DeRozan admitted that he asked Ujiri on multiple occasions this year if there was something going on and if he would be traded. He was told each time, “No”. The rest is history. If we factor in the Casey firing after leading the team to the number one seed in the Eastern Conference playoffs, and then not clearly communicating to your star player about his future with the team, you have a recipe for a toxic environment, one that really didn’t show during the season.

4. He’ll be a different player in San Antonio. DeRozan is now playing for a bonafide championship franchise. Aside from Tony Parker (and of course Kawhi) the team returns basically everyone from last year’s 45-win playoff team, including Manu Ginobili, LaMarcus Aldridge, Pau Gasul and DeRozan’s good friend Rudy Gay. Playing with a veteran team under five NBA title banners in Texas, coupled with a burning desire to prove Ujiri wrong, will no doubt unleash a side of DeRozan we’ve never seen before. When asked by Hayes what he thinks the Spurs are getting in a player of DeMar DeRozan’s caliber, DeMar simply answered, “A guy that’s been proven to prove himself time and time again — this time around having the biggest chip on his shoulder ever.”

5. DeRozan should go down as the greatest Raptor of all time. I love Vince and everything he did to put Toronto on the NBA map, but DeMar DeRozan is the greatest player in Raptors franchise history. Forget the fact that he’s among the top five in Raptors history for points (1st), assists, rebounds, steals, and games played (1st). Vince loved Toronto, but DeRozan, a kid from Compton, California, wanted to become part of the fabric of the community in the 6ix. “I took pride in the community. I took pride in everything when it came to Canada. Not even just Toronto, everything that came with Canada, wearing that Toronto Raptors jersey. That’s why it was so tough and emotional for me when I first heard it because everybody knows what type of guy I am. It showed when I went out there and played. Whether it was for the good or for the bad, I took it like a man.”

It will be interesting to see how this trade plays out during the 2018-2019 season, but one thing is for sure, DeRozan has left his mark on the city and although he didn’t achieve the success he and many others hoped for, he deserves to be remembered as G.O.A.T in Toronto Raptors history.