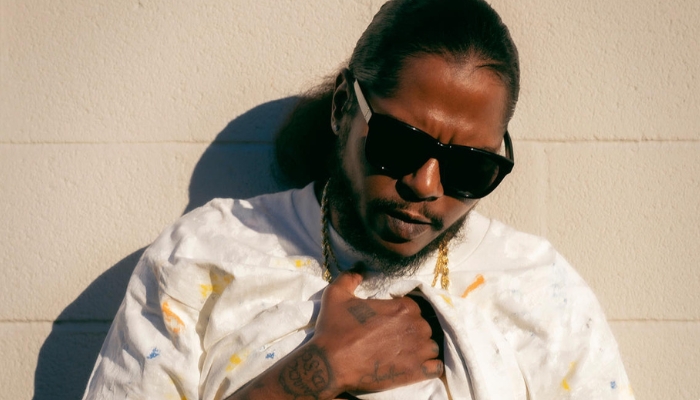 Back with his first album in six years, Ab-Soul explores all elements of his psyche on HERBERT. Read SHIFTER’s album review here.

After two decades in the industry, Ab-Soul (real name Herbert Anthony Stevens IV) has gone through a life journey that would harden most hearts. Instead of harbouring bitterness, Ab-Soul has chosen the good portion, accumulating in a reflective thought piece: HERBERT.

With features like Joey Bada$$, Russ, Big Sean, Jhené Aiko, SiR, and Zacari, Ab-Soul has created an eclectic diary on his latest album that’s immersed in the laid-back flow of his signature west-coast touch.

HERBERT sees Ab-Soul turn grief into a catalyst for realignment. As his fifth studio album, HERBERT is packed with moments of reflection. It feels like we get to explore all the extensions of what makes Ab-Soul who he is. Without fluff, he bares full face, revealing his insecurities, deepest desires, thrills, and regrets.

The album starts off with a voice message from Ab-Soul’s grandmother on “MESSAGE IN A BOTTLE”––a recital of Mark 8:36: “For what shall it profit a man, if he shall gain the whole world, and lose his own soul?” The scripture aptly sets the theme for the album. Ab-Soul lets us in his mind and spares no ounce of vulnerability. Navigating religion, depression, family, and his disability, he critically examines the things that have helped him stay afloat, and the vices that have pulled him down.

Using the pen as catharsis for an introspective coming of age, Ab-Soul’s musings are laced with the thoughtful calibre of songwriting you can expect from the dreamy Pisces. On “FALLACY”, he speaks about his desire to create a legacy that outlasts him through his music, paying homage to hip hop legend, Nas:

“I need a billi and to be mentioned with GOATS. Make history with the lyrics I wrote in my mind, you know I don’t use writing utensils. Esco once said “Hip Hop is dead”. I must be a mummy rapping my ass off, amen.”

Along with lead singles “DO BETTER” with Zacari and “GANG’NEM” with Fre$H, “GO OFF” is another memorable joint with notable features Russ and Big Sean. A viscerally-charged track, the trio use pain as a testimony to turn doubters to believers. Indeed, faith is a theme that persists throughout the album. Ab-Soul questions his own morality on “GOODMAN”, pondering on what it truly means to walk righteously.

Sonically, we see Ab-Soul veer to the left, embracing a futuristic, almost twisted vibe on “HERBERT”. Lifting our frequencies with the unconventional autobiography, Ab-Soul touches on the temporary nature of life and pays homage to friends and family who have passed on.

Cool, calm––but not to be underestimated––Ab-Soul reminds us that he keeps it G always on tracks like “FOMF”. There’s both a celebratory and somber feel to the album, most prominent on “IT BE LIKE THAT”. An existential crisis turned self-proclamation of hope, Ab-Soul goes from pessimism to optimism, encouraging listeners who may also be battling with dark thoughts that there is always a next chapter worth anticipating.

On the final track “GOTTA RAP”, Ab-Soul closes the record off with an ode to self-preservation. A victorious assertion that his mission is not yet complete, the song serves as a special message for listeners who thought the rapper might be throwing in the towel after his 6-year long hiatus.

Amidst the triumphant chorus of brass instruments, Ab-Soul speaks on how his lows were worth the highs he’s experienced. “GOTTA RAP” feels like we’re getting a special glimpse of his inner monologue as Ab-Soul counters feelings of being misunderstood with reassurance:

I even tried suicide and I don’t know why
I know better than most that the soul don’t die
Took a leap, shattered my leg, and lost some teeth
And I’m still standing behind every word I speak

By the culmination of HERBERT, it does still feel like Ab-Soul is searching for his anchor, but he’s one step closer to solidifying his foundation. HERBERT is the witnessing of an awakening; a turn of events from death to life, and a resurrection of the mind.

Listen to HERBERT above.

ALBUM REVIEW: KING’S DISEASE III IS NAS AND HIT-BOY’S BEST WORK YET IN THE KD TRILOGY