Jermaine Lamarr Cole, the 33-year-old rapper who took the rap game by storm with his mainstream debut “Work Out”. J. Cole has consistently dropped great albums since 2011 and his numbers tell the same story. Whatever reaction people have about this piece of work, it’s sure to go platinum. Absolute classic masterpieces like 2014 Forest Hills Drive showed Cole’s ability to produce classic albums.

Shortly before his latest album, KOD, dropped, Uncle Cole decided to confuse everyone with some unnecessary over the top depth, tweeting out the threefold meaning of the album title KOD- Kids on Drugs, King Overdosed and Kill Our Demons. This cryptic messaging seems really cool initially, however only two out of the three are blatant in this album. His attack on the drug induced lifestyles of young rappers today checks off the first meaning, and I guess the foundational goal of the whole album adheres to the third meaning. I would be interested to hear J. Cole explain how this album represents the overdosed King.

Really though, J. Cole has been an embodiment of real rap in a production heavy hip-hop environment that has very little care for bars, but did KOD go too far? Well…they say Big Pun was a great rapper, but with the influence of Fat Joe, he started making great records. KOD is full of great rap, but are they great records? Peep the difference. Rap is no longer strictly about an individual’s lyrical ability, there is a medley of drums and melodies that need to come together in perfect harmony to create the sonic excellence that fans demand to hear.

To that end, KOD does not produce the musical cohesion I expected. This album feels and sounds like two halves of an uneven project. The first half underachieves, with a number of mediocre, try hard songs. To be precise, the album doesn’t really take off until Motiv8 (track 6 of 12), while the second half does well to make up for the skips in its prelude. This is not to say that KOD is a bad album; it just feels like Jermaine underachieved.

J. Cole has a message of unity and a constitution of excellence that he is attempting to establish within the community. It is clear that he has grown into more than just a rapper. It seems like the longer his dreads get the more wisdom he shines with. Cole has been doing a lot more than just music, and you can tell that his words come from his growth not only as an artist, but as a human in the cultural climate we live in today. This album outlines the important role he feels he needs to take in the community.

To me he is this generations KRS-One. An educator and activist, who has a great way with words. Another important positive is that J. Cole’s bars are probably the best they have ever been. His wordplay, metaphors, and ability to ride the beat is ridiculous. He’s one of the greatest lyricists of his generation. Plus…the interludes are absolute fire!

This album is boring (with the exception of a few outliers). Unfortunately for J. Cole, our eardrums have become accustomed to (and really blessed with) great production, and this is something we didn’t see on this album. No matter how good and righteous the message is, the music needs to be a worthy vessel for that message. This could also be Uncle Cole focusing on the lyricism to ensure his listeners grasp the message, but who’s to say. The best J. Cole is the one who takes his great rhymes and couples them with great drums, melodies, and maybe even a sample or two. Exhibit A — 2014 Forest Hills Drive. 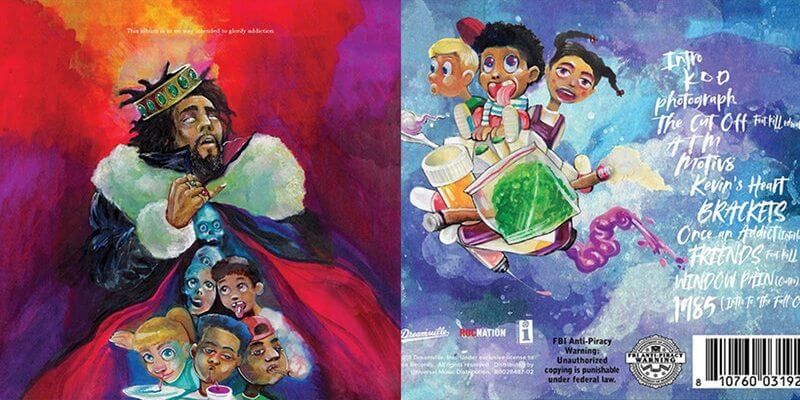 Best line: “I stacked a few M’s like my last name was Shady”

Intro: This is beautiful. Take a second and really think about this.

KOD: Catchy, but so is the flu, and nobody likes the flu.

Photograph: This is not J. Cole’s natural flow and its clear.

The Cut Off: Why’d he ruin this song with that choppy ass chorus?

ATM: His words were wasted on this bum ass beat.

Kevin’s Heart: This is the best song on the album- complete, cohesive, Cole!

BRACKETS: I wanted to protest for everything after this song. I am also very happy that high-pitched Jermaine made another appearance.

Once an Addict – Interlude: This shit made me feel something.

Window Pain: J. Cole really is for the children, fam.

J. Cole is one of the greatest artists of his generation, and it would be a disservice to judge him on a scale less than that which he deserves.

Published with permission from the author

ALBUM REVIEW – WENDY’S TAKES A BITE OUT OF MCDs WITH WE BEEFIN’ ?