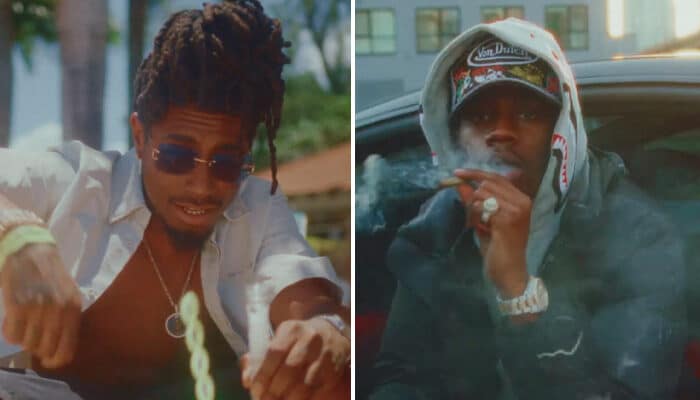 Toronto rappers NorthSideBenji and Houdini are back together again on their new posthumous track and music video “Repeat”.

Almost two years after his passing, fans are still getting new music from the late rapper Houdini. Today, fellow Toronto artist NorthSideBenji dropped a new single titled “Repeat” featuring Houdini, delivering another smash from the pair. They previously teamed up on “Too Soft” and “Levels” which currently sit at 5.2 million and 1.4 million views respectively on YouTube.

“Due to unforeseen circumstances we couldn’t get this out when we first made it back in ’19 but on behalf of The Houligan Estate we wanted to give yall something special…Especially the Day Ones who been rocking fr.”

The single also came with a new music video featuring old clips of Houdini on stage and in the streets of Toronto alongside new shots of NorthSideBenji enjoying some family time in the Caribbean.

NorthSideBenji rose to international fame after his 2019 Fire In The Booth freestyle went viral, attracting over 12 million views to-date. He struck gold again more recently alongside DJ Charlie B on their track “30,000 ft”. Meanwhile, Houdini was a star on the rise in his own right with big tracks like “Myself” and “Late Nights”. Now they have another big chune to add to their collaborative catalogue.

Their new single “Repeat” is available on all major streaming platform. To check out the music video tap the header image above.