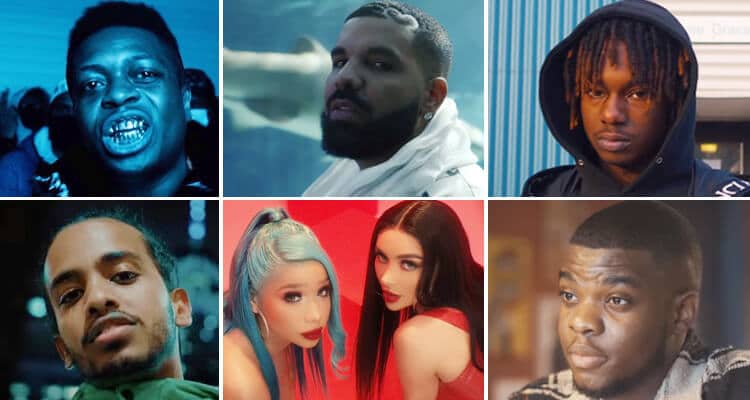 Check out the videos below in order of release date, then help us crown the top video in the country from March. Special shout out to our sponsor, realtor and Canadian hip-hop legend Greg Campbell.

Last month you voted and crowned “On God” by AP as your Video of the Month.

Who will win for April?

Vancouver artist and former SHIFTER Artist of the Month, Boslen, recently returned with his first release of 2021 titled “Trip”, the first single off his upcoming debut album DUSK to DAWN. Blurring the lines between pop, hip-hop, and R&B, the track is literally a sonic trip as the Jamaican and Indigenous Canadian artist marries smooth and steady vocals with a high energy delivery. He followed that up with a brand new video directed by Bailey Wood. Both Boslen’s laid back vocals and the production are intoxicating as we see him, his girl and homies chillin’ and having drinks. As Boslen in turn finds himself intoxicated, the beat changes as things get even more wild and trippy.

This track is straight fire, but what else would you expect from SAFE and Murda Beatz? In this Zach Stith directed video we see SAFE hanging out on the streets of New York and in the subway, even jumping a turnstile. Both the song and video are so effortless and unpretentious. It’s a chill and laid back vibe from SAFE.

Exactly a month after dropping the visuals for “Don’t Tell”, Ottawa’s Lindasson is back with “Toes”, the second music video off his debut project Lindasson. In its first week, it has already amassed an impressive 35K views and counting. The video features quick transitions and the occasional visuals effects, as well as still shots from the director and editor Ben Telford, Lindasson’s videographer and frequent collaborator.  Shot at the now abandoned Base Militaire De Sainte-Adolphe D’Howard in Quebec, the empty, gritty and graffiti filled complex provides the perfect backdrop for Lindasson and his crew as they enjoy a night out. At just under two minutes, the video packs a lot of energy in a very short period of time.

Afro-fusion artist, Shope, came back in March with the video for “Tell A Man”. Directed by Dukez, the video matches the high energy of the track and features some cool cloning effects.

Vancouver’s Manila Grey has been on a role so far in 2021, especially since the release of their album No Saints On Night Street. In March they released the music video is for “Backhouse Ballin'” featuring James Reid. Between the lighting, effects and image quality, it’s literally a movie. Overall, there’s something very “Weeknd-esque” about the Juno-nominated group’s latest offering while still making it their own.


This whole video is an ode to Toronto, from Yonge-Dundas Square and the Ripley’s Aquarium to the subway. A lot has been said about this video, but aside from the strong Toronto vibes, the opening action sequence on the airport tarmac and small touches like Drake standing on the EdgeWalk at the CN Tower really put this video over the edge.

Right off the bat, we’re told that this video is a “movie” and that’s exactly what it is, with amazing lighting, pops of colour and a storyline.

It’s nice to see two female Toronto artists team up. Unimerce killed it on production and Nadia Stone’s vocals are on point. The two also look great on camera together. Hopefully, they have more collaborations coming in the future.

In March, Ottawa rapper SVDVM dropped new visuals for “Tv”, one of the tracks off of his 2020 mixtape SVISA.  On the hook he channels some John Cena energy letting us know, “You can’t see me, unless I’m on your TV”. According to the artist himself, the KHR-produced “Tv” is a step in a new direction seeing him “shifting towards a more experimental and freeing sound”. The experimental vibes also continue on the visuals with a variety of aesthetics, from slightly hazy pops of red to sharp blue lighting and the occasional effects and transitions. Similar to some of his recent music video releases, it features SVDVM in the heart of Toronto, from a downtown condo to a parking garage to a graffiti filled alleyway, either surrounded the crew or some beautiful women.

In March, Road Runner teamed up with Visualproffesor and aether tech on some new visuals for “Bestie”, but he did something different for this video – he went 3D.  The video alternates between a 3D animated Road Runner in the driver’s seat of his car and him and his girl slow dancing. It’s obviously a unique and outside the box approach to making a video.

Choclair is back with some old school vibes – graffiti, hoodies, and a 80’s/early 90’s beat with scratching – on RocDat. Everything about this song and video is hard, and it’s interesting to see that this kind of sound and visuals still hold up today. It’s a good reminder of when you fell in love with hip-hop.

Nagy Gogetta has the look, voice and hustle to go places in this industry. Her latest video is for “Trophy”, a laid back track where she gets to show off more of her vocals. In this video we see Gogetta on the Cape Race Lighthouse in front of the Canadian Science and Technology Museum in Ottawa, and in a dark room singing her heart out. One thing is for sure. With that smile on her face, it looks like she’s having the time of her life.

In March, EverythingOShaun teamed up with Fatty Soprano on the visuals for “Odinma”. On both the song and visuals (set on a beach), we see the Brampton rapper’s Nigerian and Jamaican heritage in full display. It’s a nice introduction to spring and summer as we leave the cold behind.

To many, Duvy is considered the next up and coming Toronto hip-hop artist to watch and this song and video show why. He has a great sound and look that will resonate with audience outside of Canada as we see on “Nightmarez II”.

The King Bee shot and directed video is pretty simple compared to others we’ve seen this month, but that’s probably by design. It has great editing and quick movement, and feels very raw, showing real life in the streets.

“Boom, Boom, Boom” hitmaker, Romeo Don’t Die, came back in March with visuals for “Salgrimo”. The video has a mostly black and white aesthetic with the occasional flash of money or a beautiful woman. Whether it’s with his lyrics or his visuals, he knows how to get people’s attention.

“Peaches” is the big single off Justin Bieber’s album Justice featuring fellow Canadian Daniel Caesar and American singer-songwriter, Giveon. The song is obviously a smash and has a nice laid back and soulful vibe. Everything about this video is fire, from the set and effects to their outfits. Nothing else to say. Just fire.

Jane and Weston rapper, Swagger Rite, released a few visuals in March including “Weston Rd. Freestyle”. The song was accompanied by some simple and clean visuals that contrast warm shots of him by himself and cool shots of him and the crew.

Everything about this is wild and intense, but what would you expect from Killy and a song called “Pyro”?

The video opens and closes with shots of a car driving down the Gardiner Expressway (you’ll notice that by the end the car doors are open). In between is a black and white aesthetic with the occasional shot of a car doing doughnuts with Killy hanging out the window. Both sonically and visually, Killy has clearly found his own lane (no pun intended).

AP and Lindasson, two Ottawa artists who are generating some buzz in the capital, came together on a new single “My Cry”. On the AP-produced track the pair talk about life, as well as their experiences with love, loss, family and faith in God. From the message and introspective content to the moody vocals and soft guitar riff, the track is infused with soul, providing the listener with a feeling of hope. Not only do they compliment each other sonically, but there’s clean onscreen chemistry between the two. Adding to the authenticity of the track is the honesty and lack of pretense found in many hip-hop songs and music videos today. The music video, directed by Ben Telford, continues this narrative as we see the two rappers navigating the journey of life, from youth to love.

Kofi feat. Kwesi Arthur
Don’t Give Up On Me
Release date: March 27, 2021
Animated by: Poka Studios

“Don’t Give Up On Me” is one of two music videos Kofi, one of the most consistent hip-hop artists coming out of Toronto, dropped in March, both giving us some African vibes. These cool animated visuals are both a lyric video and music video as it has a strong storyline about Kofi trying to hold on to his girl. Very creative visuals from Kofi and Poka Studios.

Mississauga rapper Fame Holiday came back in March with visuals for “Line Me Up”, once again directed by Trey Timeless. The versatile artist has given us different sounds in recent months, and now he’s back giving us bars on this bouncy beat from Mendollaa.

If you follow Fame Holiday on Instagram you would’ve seen him and Romeyo Wilson riding ATVs in the snow. Well, this is that video. Aside from having fun in the snow, we see Holiday holding court, sitting at the head of the table with his friends as they sip some wine. We also see him performing live with the Toronto skyline in the background.

There aren’t many artists in Canadian Black music who have carved out more of a unique sound and lane than Mustafa. In his videos, the Regent Park folk singer tends to blend beautiful vocals with shots of the streets and “Ali” is no different.

In this one we see Mustafa hanging out with his friends in an apartment and in the streets as they disappear one by one until he finds himself alone. Both the song and video are gripping depictions of loss faced by many living in at-risk neighbourhoods.

In this video, we see a very low key version of the The Weeknd wearing a jean jacket and baseball cap, a major change from his movie-like After Hours music videos. It appears to have been shot on a cell phone, adding even more to its casual vibe. After a while, we realize he isn’t alone as he’s in the car with two beautiful women who can’t seem to keep their hands off each other.